I had the pleasure of spending a few hours with a grumpy frog, Eddie Hitler and one quarter of McFly last night.
Baby Bookworm’s bedtime story was left safely in the hands of Chief Storyteller (aka his dad – he’s much better at doing voices than I am), while I headed off to the Penguin Random House Children’s Presents event – a showcase of their best forthcoming releases.

As humans, we seem to take huge comfort from old favourites and get a thrill from discovering the new, be that music, fashion or books.

This event had a mix of both, with authors new and established sharing their latest stories – and the inspirations for them.

By far the most experienced in attendance was the legend that is Jacqueline Wilson, whose 106th book Wave Me Goodbye focuses on a 10-year-old wartime evacuee called Shirley.

Jacqueline told us how children she speaks to at events often mistakenly think she is in fact 106 rather than that being the number of books she has had published. Quite how she has managed such an output without being that old is beyond me.

Apparently the idea of tackling the topic of wartime child evacuees in one of her novels has been simmering for some time but she feared she might not be able to do such a big topic justice. It shows that even the greatest authors doubt themselves.

Another very familiar face but first time children’s author was comedian Adrian Edmondson. His book Tilly and the Time Machine was inspired by two things: his straight-talking seven-year-old next door neighbour Betty – and death! 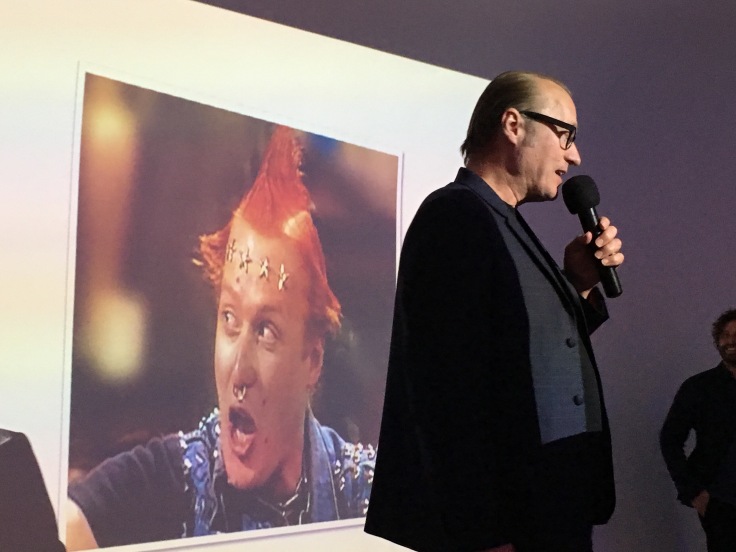 “Quite a lot of friends of mine have died in the last five years,” explained the Bottom star. “Three of my top five pegged it. And people start to avoid you. Someone like Tilly would be able to tackle the subject.”

Fellow ‘slashie’ (see Zoolander if you’re not sure what I mean) Tom Fletcher read an extract from The Creakers, his new mystery for children of seven and above, about what happens if you wake up one morning and all the adults have suddenly disappeared.

Tom commented that some people might be cynical about musicians or actors who turn author, but the dad-of-two has sold more than a million copies of his Dinosaur That Pooped picture book series – and the target market of that have no idea who McFly are. He must be doing something right.

He’s a busy man too, with another picture book called There’s a Monster In Your Book out in June. Read what he had to say about bedtime stories with his sons Buzz and Buddy here

Sisters Natalia and Lauren O’Hara are making their picture book debut this autumn with Hortense and the Shadow – it’s written by Natalia (who incidentally, combatted her dyslexia growing up by reading aloud to her sibling) and illustrated by Lauren.

Their grandmother, who used to tell them stories about her own childhood on walks in the wood, was a big influence on this beautiful sounding and looking tale, along with the Eastern European children’s books read to them by their mum.

Our pick of the night, however, was Ed Vere’s new offering, Grumpy Frog. His picture books are irreverent and quirky, and this one is no exception. 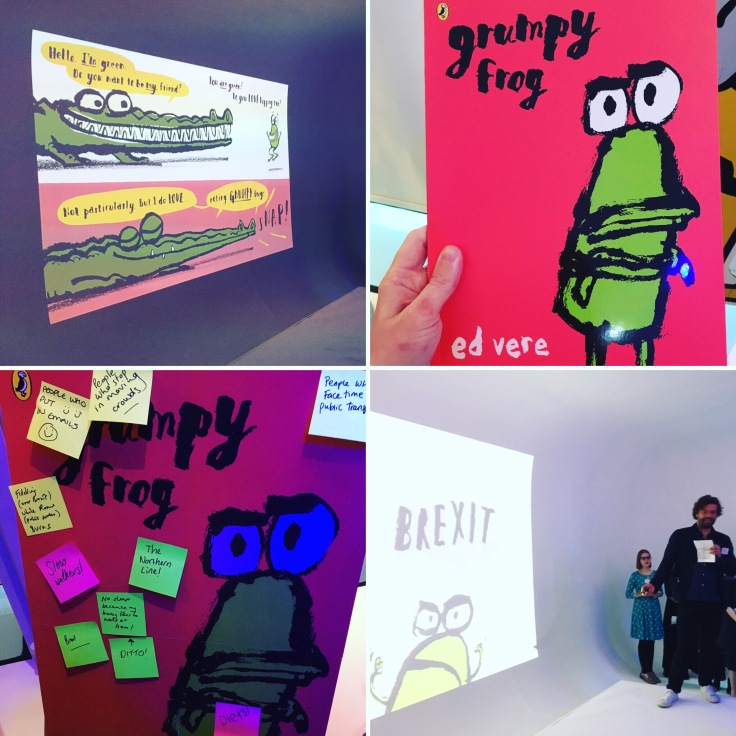 Ed told us he that the frog was modelled on the target audience (and maybe Nigel Farage too…). “Children lack moderation,” he explained. “They swing from like to dislike, extreme enthusiasm to extreme rage.”

The book is designed to tackle tantrums in a funny way but also the topic of intolerance. “There are a couple of intolerant voices around right now and I worry what they will learn.”

I’ve brought a copy home for Baby Bookworm. He might be a bit small to learn a lesson from Grumpy Frog but at least we have tonight’s bedtime story sorted.

We’ll report back on the verdict soon.