Rob Biddulph is something of a household name Chez Bookworm.

His wonderful books Odd Dog Out and Grrrrr! are bedtime story staples, with the former winning the BSC Festival of Literature Picture Book Award while the latter was nominated for the CILIP Kate Greenaway Medal no less.

The author-illustrator’s fifth picture book, Kevin, has just been published and has already grabbed our attention. It’s the story of a boy called Sid and his not-so-imaginary friend, who he tries to blame for his bad behaviour at home.

The book feels like an evolution in Rob’s style, with a more grown-up narrative and potential to become a children’s film.

We caught up with Rob to talk about his inspirations, the long labour of love that is creating a picture book and why he’s all about girl power…

You used to be a magazine art director – what made you switch to writing children’s books?

“I had an epiphany when I was reading with my middle daughter Kitty about ten years ago. I thought ‘I can do this’. I did a lot of illustration at university but I switched to graphic design and went to work on magazines for 20 years – Just 17, NME, The Observer.

“I decided to write a story, draw the pictures and see how I got on. I had no idea how competitive it was or how difficult it was to get published when I started, otherwise I might not have tried!”

What comes first for you – the words or a character?

“Usually a one sentence story idea. I’ll be walking around Waitrose, have an idea and put it into my phone. With Grrrrr, I was driving and listening to Magic FM when a song by Everything But The Girl came on. For some reason, my head went ‘Everything But The Grrrrr would be a really good idea for a story…’. That stuck with me for a few days and I unpicked it and thought about what that could be.

“I start drawing characters next because I think it’s nice to have a picture of the main character in your head before you write properly. Quite often I will draw one of the key scenes from the story before getting into the nitty gritty and doing little thumbnails. Once I have a pretty good idea of the story arc, I go away and write it like a poem. That’s the bit that takes me a long time. It can be six months to a year.” 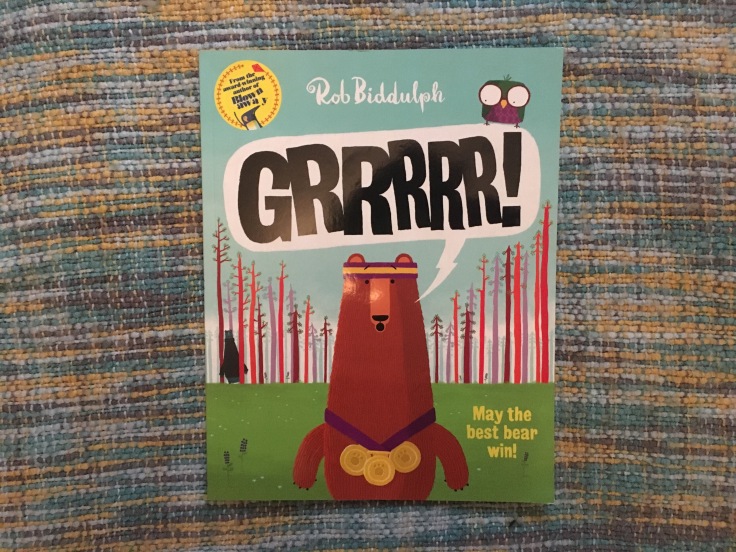 I think you can tell that you put a lot of effort into the rhymes because they flow so easily. We can recite all of Odd Dog Out in our house!

“I feel I should apologise because I know what it can be like to read the same book ten nights in a row. But that’s the aim – you want it to flow, almost like a song.

“I find that when I’m at schools or festivals, I look up and the children are mouthing the words with me. I think rhyme really helps with that, like a pop song. It’s also great for humour. Dr Seuss was a genius at that.”

Why is getting the right words so tricky with picture books?

“You have 12 spreads to tell the story and you can’t put too many words in. It’s frightening how few words there are – maybe 600. To get the story across is really hard. That’s the beauty of picture books – the words do one part of the job and the pictures another. They need to compliment one other.

“When you write in rhyme you make it even harder for yourself. Sometimes it will take me a week to do one couplet and I will test it out on my wife and daughters to see if it makes sense. You can have the most beautiful rhyme but sometimes it doesn’t do the job. It can be quite a frustrating process. You can’t be too precious.”

Do you think that your journalism background has helped because you are used to others editing your work and thinking about the reader?

“You are exactly right. You have to think about everything from the reader’s point of view. Also, the process of planning out a magazine, thinking about the pace of a feature and the design of the page, I’ve taken directly to my books.

“I often think the two industries are closely related. Even the people that you meet in the book publishing world are similar, except they are 20 to 30 per cent nicer!” 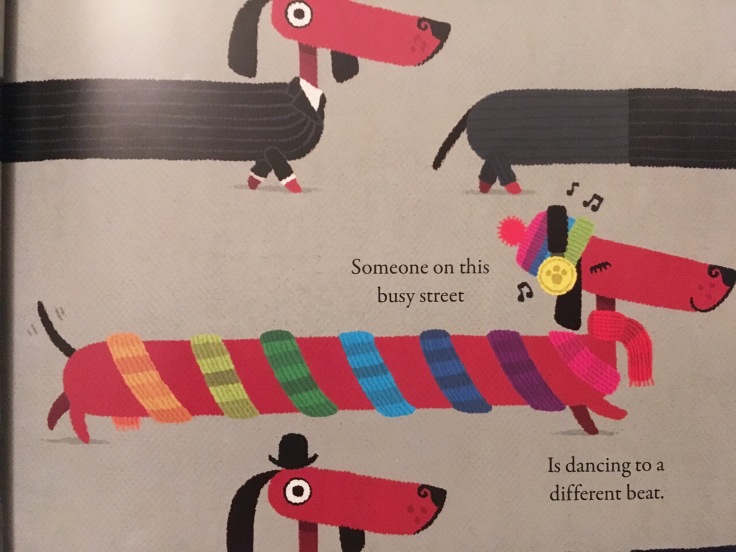 How much of an influence are your daughters on what you write? For example, the story of Odd Dog Out is very positive for children and also has a female lead character.

“That was a very deliberate decision. I’m the father of three daughters and aware that there are far less female leads in picture books than male. Even though there are lots of animal characters, most people’s default setting when they see a dog is to say ‘isn’t he cute?’. Even in my first book, Blown Away, I never say what gender the lead character Penguin Blue is.

“I feel picture book authors and illustrators have quite a responsibility on their shoulders. Your books are introducing children to the world of reading and to the world of ideas. Children really do embrace them. I go into schools and when I flash up pictures of books, they really cheer, like cheering for a favourite football team. Books mean a lot to them.

“The idea for Odd Dog Out came from my youngest daughter, Poppy. We had an issue at school – she didn’t have the right pencil case. I told her ‘you don’t need to be like everyone else’, and decided to write a story about that.

“There are definitely experiences you have as a parent that help you write these books. And when you sign a book deal, you have to develop an ‘act’ and go on the road. Sometimes I am doing events in front of thousands of children!”

And children can be harsh – they are going to tell you if they don’t like something!

“Oh yes, they just stand up and walk off! Or they yawn or put their hand up and say ‘I’m bored’. It’s tough. But the fact that I have three girls and have done lots of birthday parties, means I have learned how to talk to children.”

Lauren Child recently said she finds it frustrating that people think her books are for girls because they have female lead characters.

“I totally understand that. My new book Kevin has pink on the cover because the character is vanilla with pink spots. He is based on my daughter Kitty’s imaginary friend and that is how she described him to me. I didn’t want to change that. But there were conversations along the lines of ‘does he have to be pink on your cover?’. I don’t think it works like that and if it does, it shouldn’t.”

You have just done the pictures for a new edition of Flat Stanley by Jeff Brown. How do you find illustrating someone else’s books compared to your own?

“It’s totally different. The drawing process is the part I find easier so when I get to that stage, that’s the nice bit. It’s a relaxing thing to do.

“The difficult bit is coming up with the characters and getting the identity right. Especially with something like Flat Stanley which has been around since the Sixties.

“When I knew they wanted me to do it, I didn’t look at the old books. I was familiar with them but wanted to do it my way. It was a nice process. I think in the future I’d like to have a go doing a collaborative picture book, if the text was right.”

Who would your dream author be to work with?

“I’d steer clear of another rhyming author, like Julia Donaldson, although I do like her. It would be nice to do an Eric Carle book. Or Kes Gray.

“Some of his books were my girls’ favourites. He has great concepts and he’s quite a character. We get on really well. He’s offered me a couple of texts and it hasn’t quite worked out with contracts and stuff but hopefully one day it will.”

Finally – how did you feel about Tom Hardy reading Odd Dog Out on CBeebies?

“People seem to be quite keen on Tom!”

He’s not my cup of tea but I know other mums like him. Did you get to speak to him?

“I didn’t, to my wife’s eternal dismay. The BBC approached me a long time ago, back in November, but I didn’t hear a thing until three days before they put it up on iPlayer. I thought he did a brilliant job – although it means I can never really read it again!”

Kevin by Rob Biddulph is out now. £12.99, HarperCollins Children. Find out more about Rob’s books and events at robbiddulph.com

Read our review of Odd Dog Out

11 thoughts on “We meet… Rob Biddulph”