Good things come to those who wait, so the saying goes.

You try telling that to a toddler…

Baby Bookworm does not do delayed gratification. When he wants his tea, he wants it RIGHT NOW and we suffer a rather dramatic episode of “hanger” (angry when hungry) which I try to firefight by lobbing snacks over the kitchen safety gate while frantically cooking.

By the end, the scene is not unlike the closing pages of I Really Want The Cake after the heroine has baked up a storm (of destruction) in the kitchen – all wild hair and eyes, food everywhere.

There’s something really cheeky and joyful about this story of a little girl and her internal battle between the desire to indulge in a slice of cake and the knowledge that it is forbidden.

Simon Philip’s rhyming text is funny and flows brilliantly, with each verse ending in “cake”. This repetition helps to build the tension and humour, as well offering an opportunity for your child to join in.

But what we really adore are Lucia Gaggiotti’s quirky illustrations.

There’s an energetic Manga vibe to them that conveys the wild mood swings and deeply felt urges of a child at this age.

One minute our girl is virtuously walking away from the source of her lust, all prim and proper. The next she’s wide-eyed and drooling, unable to contain her greed.

She is the epitome of sugar and spice.

The pictures are incredibly funny too, as she transforms from cowgirl with cutlery-loaded holsters, to spoon-wielding ninja warrior, to cape-wearing superhero. 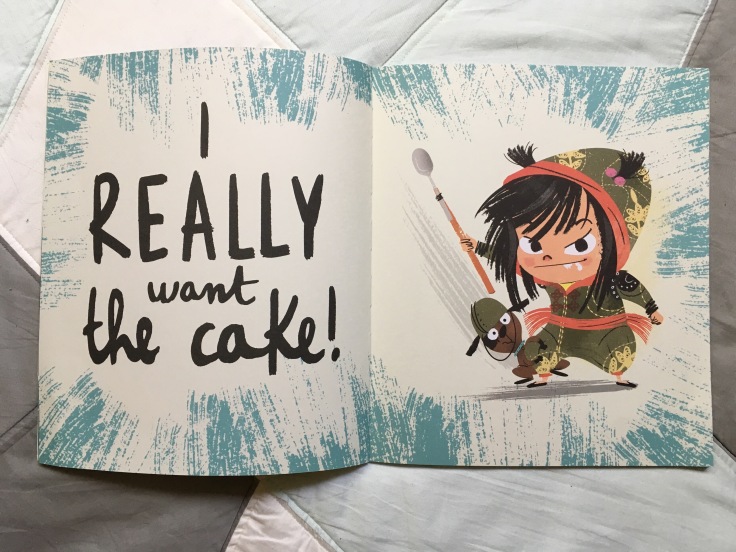 The double act with her pet dog just adds to the appeal. They are partners in crime, up to no good.

Inevitably, they give in to their greed and what ensues is a messy attempt to right their wrong that will raise a chuckle from children and a knowing smile from parents.

Forget cake, what you really want is this book!

I Really Want The Cake by Simon Philips and Lucia Gaggiotti, £6.99, Templar

11 thoughts on “What We’re Reading: I Really Want The Cake by Simon Philip & Lucia Gaggiotti”