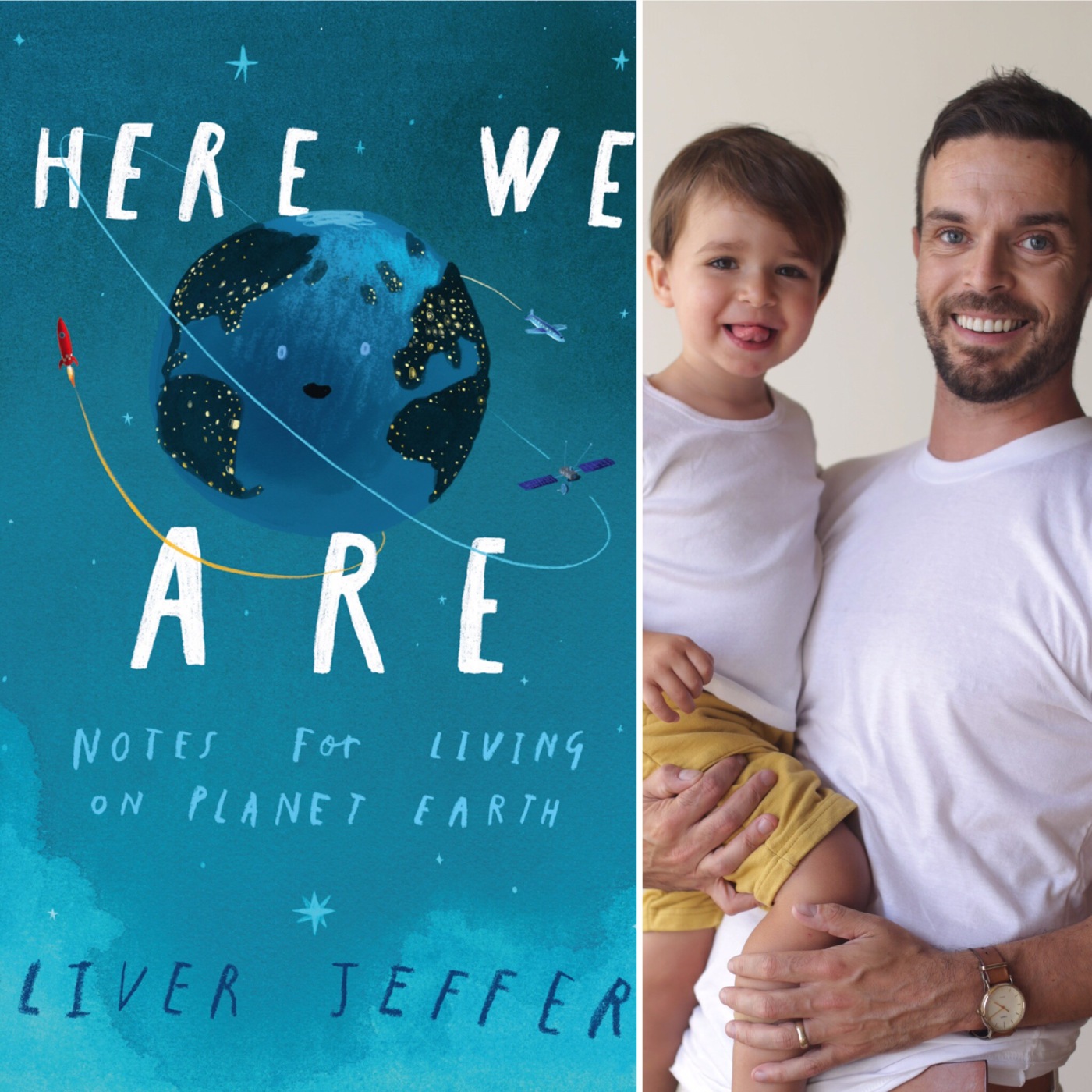 Over the last 13 years, Oliver Jeffers has turned the creation of picture books into a real work of art.

As an acclaimed fine artist, his boundary-pushing illustrations combined with a natural curiosity and wit have seen him become the sort of author-illustrator that inspires an army of imitators.

Since his debut How To Catch A Star, the Northern Irishman has won numerous awards and topped the New York Times bestseller list. He’s also collaborated with a range of authors, creating the hilarious The Day The Crayons Came Home with Drew Daywalt.

His latest project is being a dad to son Harland and this important role was the inspiration for his stunning new book, Here We Are: Notes for Living on Planet Earth.

The book is breathtakingly epic and touchingly simple all at once, capturing the enormous weight of responsibility a new parent feels when their child is born along with the sense of possibility and excitement for their future.

It includes some vital life lessons about how the world works, the strangeness of being a human and the inherent goodness of society.

I have to confess that I’ve cried each time I’ve read it  – and even Baby Bookworm’s uncle and aunt, who are not parents, admitted that they felt teary looking at it, too.

The new book was inspired by your son’s birth. Did it start on one of those late nights when you were up with him as a newborn?

“I started taking note of some of the obvious things I needed to explain to him, because there was a nice sentiment to them. I didn’t know it was going to be a book – I was composing something for him. I realised it was sort of a humorous thing to give a two-day-old human being a tour of our world, to explain what things were. Those things, combined with my commentary on social media about politics and the way I was feeling about our planet came together. Once the idea occurred to me, it seemed extremely obvious.”

Having a child is life changing but were you surprised at how it felt?

“Yes and no. A lot of things I thought would change haven’t really. A lot of thing have – the way you think about things, your perspective. Everybody’s own children are infinitely interesting to them, which is a convenient thing because you are stuck with them, aren’t you?! I thought I would never have a social life again or be productive, which is not true. But the things I want to do have changed.”

Do you feel you might write more books with Harland as your audience?

“I think it is inevitable, but probably not right now. This book was such a massive undertaking and then I’ll be touring. Next year I’m moving back into the fine art world, which was scheduled in before he was born.”

This book is simple in some ways because you are talking to your child but there are very complex themes. Did you have to do a lot of research? For example, to correctly draw the solar system?

“Very few things I would have known off the top of my head, like names of stars, but that came from flicking through books. Most of it is highly inaccurate! So the planets are in the right order but I used the ‘get out of jail free’ card by writing ‘this is probably not to scale’ on it. When I was drawing the sky and the various layers of the atmosphere, I sketched it in and thought ‘this looks great’. Then I researched and realised it is completely inaccurate as there are eight more layers! But that would get in the way and I preferred my original drawing. So I got away with it by writing ‘the stratosthingy’.”

The scale of the illustrations is pretty epic. Do you create them on a large scale and they get sized down or is it very detailed drawing?

“The way in which I made it was interesting. It was sort of like the technique old animators used where the backgrounds were physically painted, then the detailed and character stuff was done on cell, on top. My backgrounds were painted, in various sizes, and then I used digital techniques and Photoshop to get them looking right. Then I would import in templates to the iPad and use Procreate to do some of the detailed work – you can zoom in on that.” 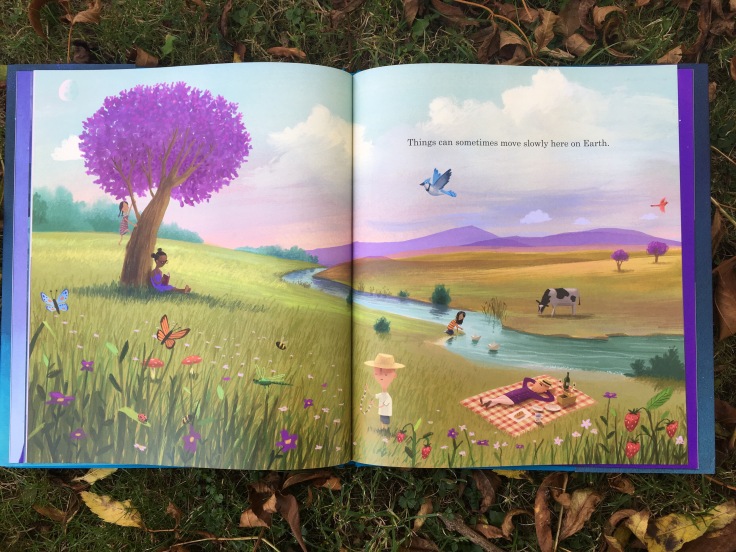 At the end of Here We Are, there is a quote from your dad. Has he been much of an influence on your work?

“He has been a huge influence on my life but I’m not sure about my work. If I really picked it apart, I could find stuff. My work tends to be about curiosity and storytelling – and he tells a good story and he taught me to curious, I suppose.”

I’ve noticed that the sea and the sky seem to feature an awful lot in your books. Why are they so fascinating to you?

“They are just beautiful, large objects beyond the full realm of our comprehension.”

It’s interesting that you work in both the picture book and fine art worlds. Do you think people are starting to treat picture books as more of a skilled, fine art medium?

“I don’t really know the answer. They were always well regarded within families and the book industry, but in fashion and fine art, they were probably looked down upon. That is becoming less so. But there are a lot of interesting people working in the realm these days and books have become relatively fashionable. I had always intended to become a fine artist before it occurred to me to make books. Once I made that decision, I never deviated away from my original intention. I do find it easier now to talk about both to the same person – I just confused people before. I find it easier to mesh together both worlds somewhat.”

Do you think you are increasingly bringing the fine art sentiments into your books? I’ve noticed a progression with how adventurous they are.

“With this one, yes. And the last one – A Child Of Books – very definitely, because Sam Winston who I made the book with is a highly regarded typographic fine artist. But with Here We Are, without necessarily thinking about it, the more painterly aspects of my fine art practice starting sneaking in to the way it looks. Some of the animals, characters and landscapes look more developed than they usually do. Maybe that’s because this book is about everything and it is factual. The other books are about small stories in a large world and leave more room for people to insert themselves into them.”

Do you think publishers are being more adventurous too?

“I don’t know if they are or if I have earned my stripes and I can get away with more than the average bear. I’d have to ask someone who is just starting out.”

I interviewed Children’s Laureate Lauren Child and she felt that in Britain we were still conservative with our picture books, but when she goes into a bookshop in New York or Paris, she is really excited by them.

“I think the American picture book market is actually much more conservative than here. It is a much larger industry and they react to trends in a slower way. They are definitely taking the lead from Britain. But here’s a fascinating thing. I’ve always thought French books were beautiful and leaps and bounds ahead. Then I spent some time in France last year working with the department store Colette on a project. I got talking to someone who was raving about British books, saying they were superior. She told me the French books were beautiful but there was no story. They were vacuous, there was no heart to them. I found that very interesting and because I don’t speak French, I’d never realised that before.” 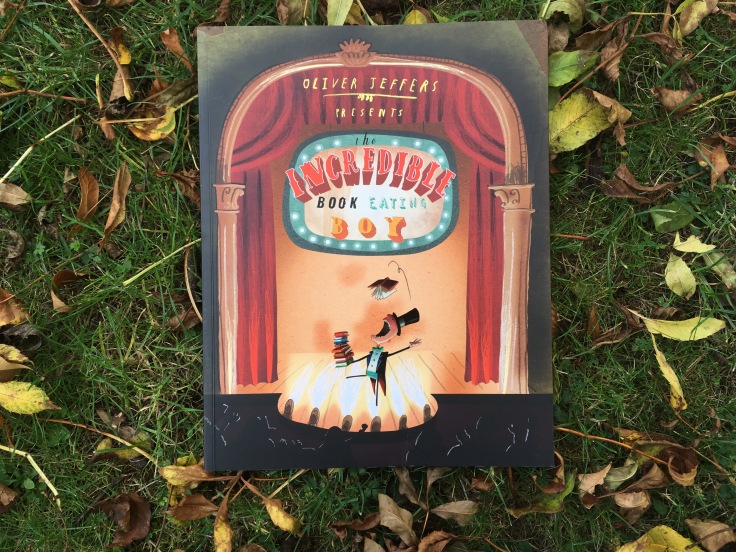 Why are picture books such an appealing medium to work with?

“It’s a very cool thing. You have a degree of control of the pace at which a story develops, you can use the tools at your disposal to unveil the story. But there is slightly more interaction with the person reading it than in, say, a film or a play. They are a set amount of time, every day. But the reader of a book has a greater amount of control over how quickly or slowly and the conditions under which they are reading. It’s a more participatory act. At the same time you have tricks and tools to suggest things. It’s an interesting platform.”

How does your ideas process work?

“I wish I knew that! If you think something is interesting you write it down. Then if you think something else is interesting, you write that down. Occasionally you realise it goes with the previous thing. It’s a matter of chipping away and letting time do its thing, not forcing it. There is no such thing as creativity on tap. It happens when the mood, the electricity and the – what’s that Roald Dahl quote? – two per cent butterscotch ripple, works.”

Has your Northern Irish heritage and upbringing influenced your books and what you put in them?

“Massively. Someone once asked if the nature of duality in my work come from that and I guess it probably has. But the more obvious one is sense of humour. In Belfast there is a very particular sense of humour that has a darkness and a self-deprecating quality to it that has crept into my work. For even in the most serious moments you have to find something funny.”

There’s the language too, isn’t there? In The Incredible Booking Eating Boy, you use the word ‘boke’ when Henry is throwing up after eating too many books.

“Even Here We Are, the title of the new book, is the sort of thing you say when you get somewhere. You humorously announce to the group something that is incredibly obvious.”

Do you think including your heritage will be more important to you now you have son, given that you live in America?

“Maybe not in the books. What is that Samuel Johnson saying? Patriotism is the last refuge of a scoundrel. I tend to anchor myself more on cultures than the idea patriotism. There is a sense of Northern Irish culture and Belfast culture that is already a part of the work. But we spend a good deal of our year, several weeks, in Belfast because we want him to be connected to there and our families – my wife is also from there.”

Finally – we touched on this a little earlier – you have strong views on the state of the world with Donald Trump, Brexit and all the uncertainly they bring. Do you think that will filter into children’s books a bit more over the coming years?

“Yes, I think you are already starting to see it. There is a bit of a zeitgeist of books about idealism coming through. I think it is inevitable as people try to process this and explain this to children who are trying to wrap their heads around why this evil exists, why this inherent greed and selfishness. Books are a good place to start having those conversations.”

Here We Are by Oliver Jeffers is out on 14 November. £14.99 (hardback), HarperCollins Children’s. Find out more about Oliver’s work at oliverjeffers.com

Read our review of The Incredible Book Eating Boy

12 thoughts on “We meet… Oliver Jeffers”