The day we meet Sophy Henn for lunch, she has been to Michael Bond’s memorial service at St Paul’s Cathedral.

“I’d never met him so felt honoured to be invited,” the warm and chatty author-illustrator tells us, adding that the beautiful service gave her “goosebumps”.

Like the rest of the nation, Sophy is a big fan of Michael’s treasured bear from Peru. “My mum made a full Paddington ensemble for my teddy bear,” she reveals.

“I’m re-reading the books at the moment and buying them for kids for Christmas. With the way the world is right now, we need those stories and that character more than ever.

“Apparently when Michael Bond was faced with a dilemma, he would say ‘What would Paddington do?’. It’s a wonderful rule to live by.”

It was another charming bear that marked out Sophy as a rising star of picture books when her debut Where Bear? was published in 2014.

This adorable tale about a boy finding a new home for his furry friend is gorgeous to look at and has so many layers to enjoy, from the simple repetitive refrain of ‘where bear?’ to the message about enduring love and allowing animals to live in their natural habitat.

It’s a real favourite for us at bedtime (and on the go, as the new board book version fits perfectly in a change bag) and was nominated for the Kate Greenaway Medal.

A former advertising art director and a mum, both of which inform her work, Sophy hasn’t looked back since she made the leap into children’s books, with a bestselling series about young panda Pom Pom and two stints as World Book Day illustrator to her name.

Her seventh book, Almost Anything, about a fearful rabbit called George, comes out in March.

We’ve had a sneak peek and can confirm it is another beautifully illustrated, empowering tale for children (and features yet another loveable bear).

Why do you think bears are so prevalent in children’s books – and why do you love them so much?

“I think it’s the warmth. They are either something small you can cuddle or something big that can cuddle you. That’s why I am drawn to them. I would probably have bears in everything. I’m trying to shoehorn another bear into a book right now!”

Your bears are all quite different, aren’t they? I particularly love Where Bear with his dad tummy.

“In Where Bear it was about having this big but helpless creature, which was empowering for the boy. I find that children are often the most practical problem solvers. We will agonise over a problem but a child will see straight from A to B.”

Where did the idea for Where Bear? begin?

“I’d written in a notebook somewhere, Where Bear? I didn’t really know what it was. Then I went back to university to do an MA when I’d admitted to myself I wanted to make children’s books, which was really scary.

“I was mucking about with some acrylic paints at the kitchen table, the family all around me, telly on. I painted this little white bear in a dark wood and he looked a bit worried and lost. And it came from there.

“I knew he was not in the right place and the idea came to me – ‘where is he supposed to be?’. He changed loads for a good 18 months. I got the story to almost where it is today, but with a more abrupt ending, and entered it for the Macmillan Prize where it was highly commended.

“After I met my agent, I gave the book a more soothing ending, where they are chatting on the phone.” 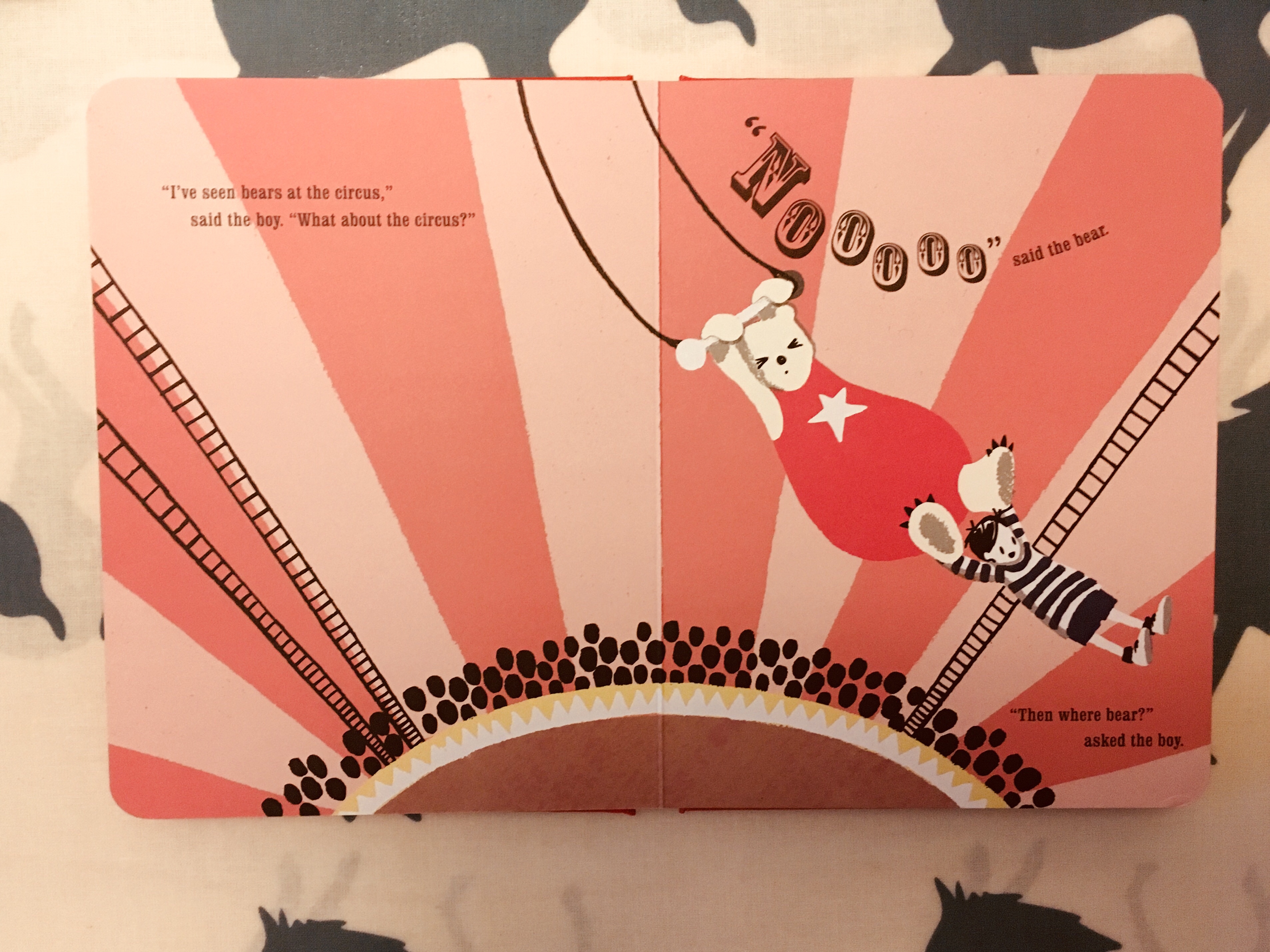 I like that about the ending, how they don’t have to say goodbye because he moves away and how they are planning a trip together.

“I love doing events where kids tell me where they think they are going.”

Your background is art so were you nervous writing this first book?

“When people describe me as an author, I still go ‘ha ha’. I did fashion communication for my degree speciality but my writing tutor was never a fan of my work. She would probably be appalled if she knew what I was getting away with now.

“I’m amazed and thrilled – and worried I’m going to get rumbled. But I’m feeling more and more confident. With all creative things you have moments of both.”

How has working in advertising influenced your work?

“It has informed my work massively. In its purest form, advertising is getting a strong image and a few words, and by combining the two, relaying a message in a quick way.

“That’s essentially what you are doing on every page of a picture book. I will ruthlessly edit in that way. The new one is the highest word count I’ve ever done.

“When you tell your friends you are working to a deadline, they sometimes say ‘it won’t be hard, it’s not many words’. You want to go ‘I’m not picking random words and putting them in a line!’.

“You have to pick them carefully. It’s an art. I’ve always come from the less is more side of things, so it was challenge to have so many in the new book.”

What comes first with your books – image or text?

“With Where Bear? it was the character, and for Pom Pom too. He was my MA project. It was actually a comic for key stage 2 girls to counteract all of the pink magazines out there.

“Every single one of my books seems to be a letter to my daughter when she was younger. Pom Pom Gets The Grumps was about girls getting to seven and having a massively hormonal surge.

“I wasn’t ready for it, I thought it came at 13. They still look the same and they are cute and lovely, then there will be this ‘RAWR!’. They look surprised, you look surprised. So he was called Angry Panda. And the story was about that – it happens to everyone, you can see humour in it, it will go away.

“I want to reassure kids and empower them. Having been a worrier myself, those are the books that come out.” 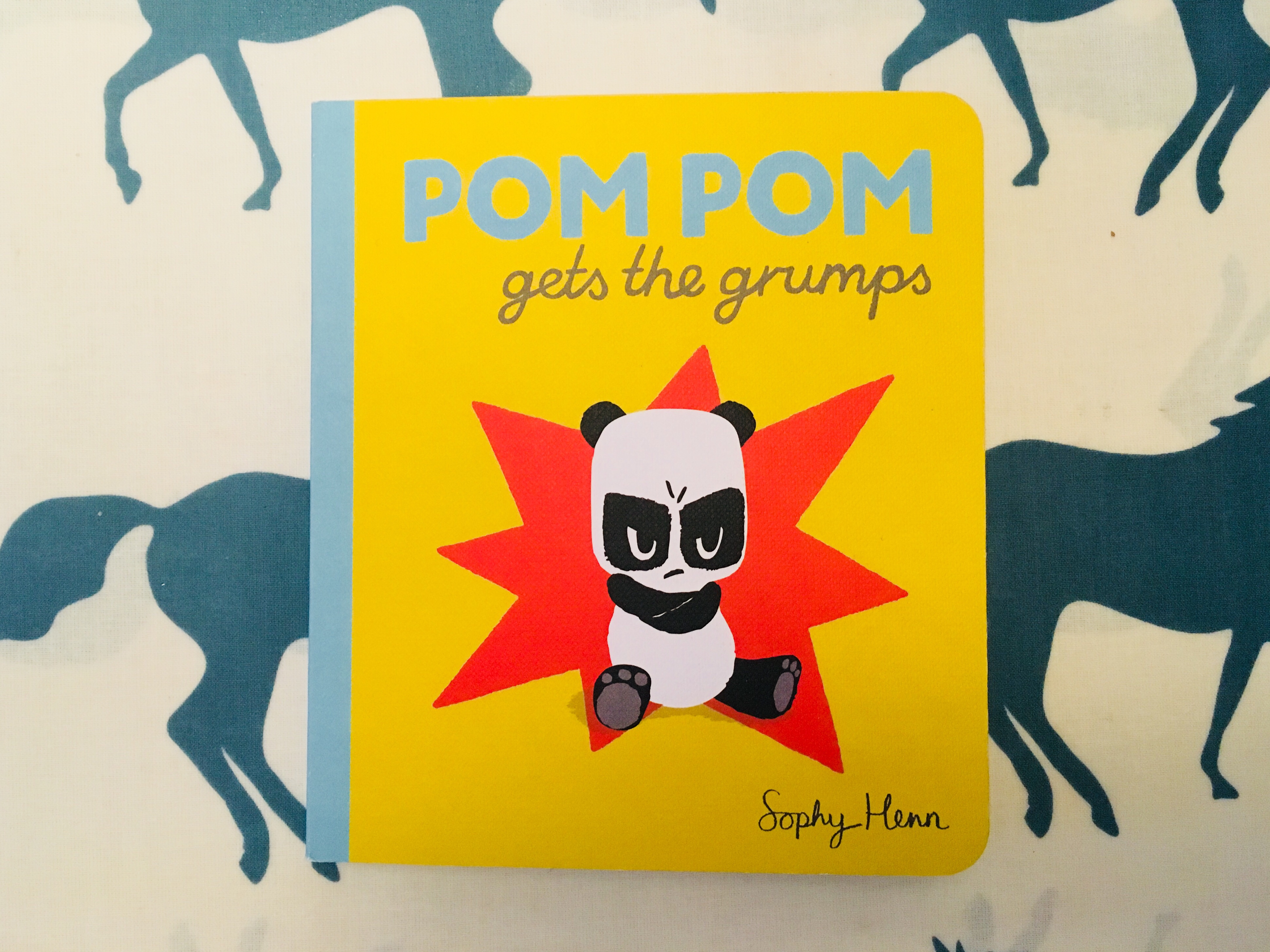 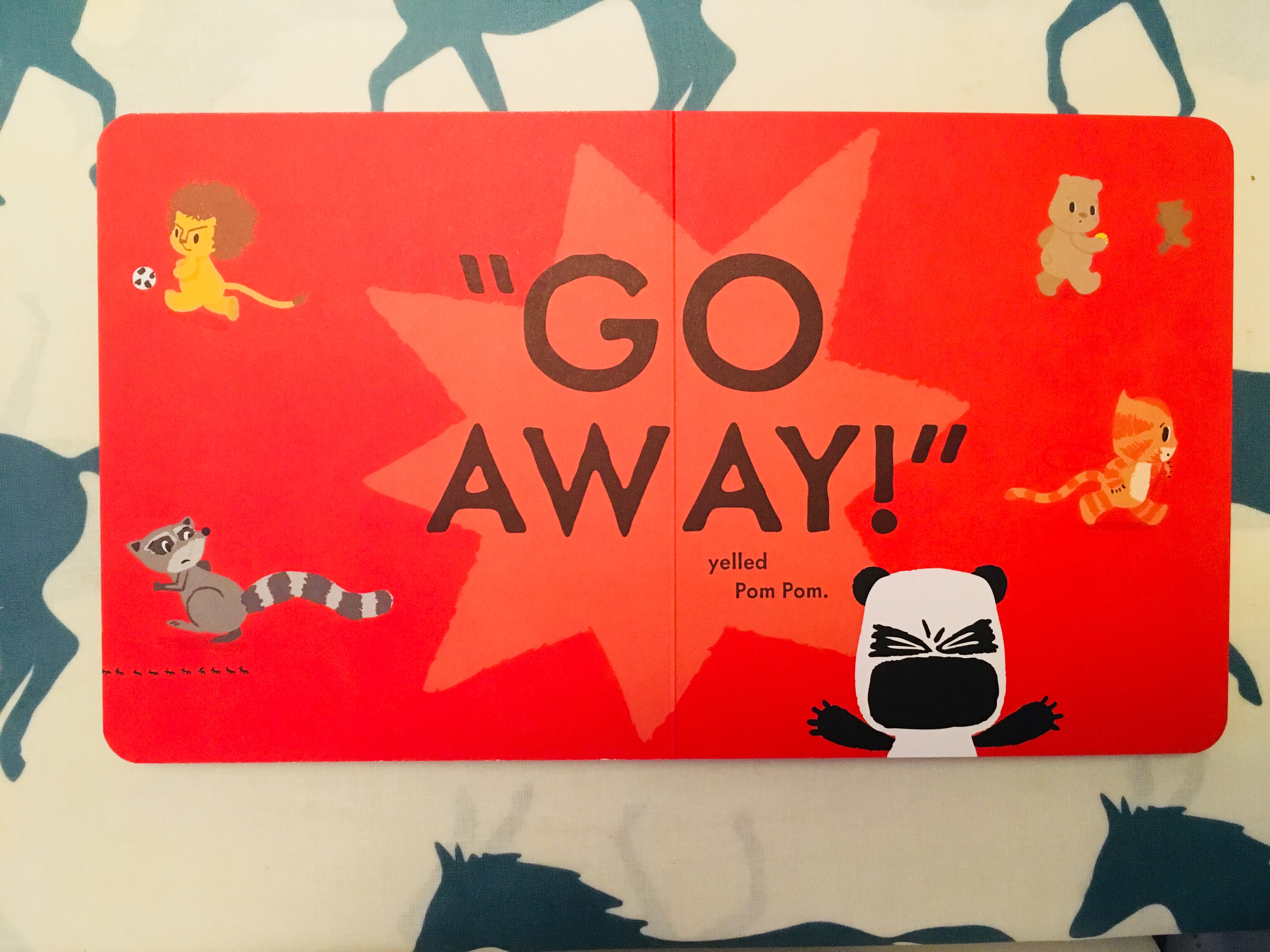 Did you expect Pom Pom would be recurrent character for you?

“Not at all. I didn’t dare dream that would happen. It does make you giddy with excitement when you go to an event and there is the cutout Pom Pom there and a kid comes in jumping up and down. There was a little girl at a bookshop in Hove and she was a Pom Pom superfan.

“When I see World Book Day costumes of Pom Pom, I’m weeping. You put your work out there and hope they will like it.”

Your next book, Almost Anything, is a bit different because it has many more words and it stars a rabbit. Where did you start?

“This rabbit character has existed in my head for a while. His ears are the barometer of his mood.

“The story came from having witnessed lots of kids who feel they can’t do something – you see them at parties or in the playgroup and they don’t even give themselves a chance. We are all guilty of that and getting nervous of our failures.

“But happy accidents send you on tangents and open up opportunities. You need a little magic self confidence to give it a go. That’s why it is called Almost Anything. Because you can’t be brilliant at everything!

“We put so much pressure on ourselves. The conversation we’ve just had about the difficulty of being working mums, for example. We shouldn’t beat ourselves up about dropping an occasional ball.

“Having a go is the most empowering and brilliant thing. Have that bit of belief in whatever it is and who knows where that will take you? I’m sitting here having this conversation, looking at my books on the table and can’t believe my luck.” 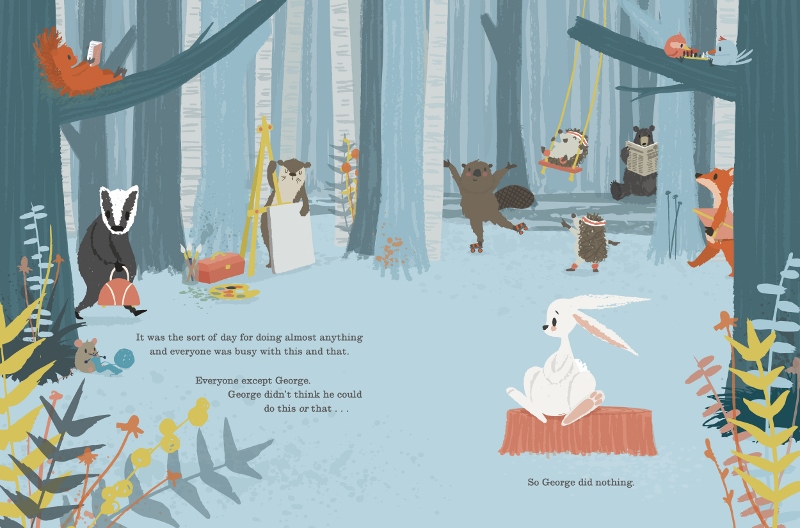 It probably doesn’t feel like a whirlwind for you but you’ve published quite a number of books in a a short time.

“It has been really busy. The first one came out in 2014 when I turned 40 and we’re working on book eight now! But my former life in advertising and the turnover of work has given me momentum.”

Your style is so distinctive. Is that important to you?

“Yes. I’ll think of a rabbit in my head but by the time it comes through my fingers, it looks this way.

“You can see the things I like in the images too. I’m a Wes Anderson fan and I’d be lying if I didn’t admit the hedgehogs in the new book aren’t inspired by Richie Tenenbaum. In Pass It On, the boy has a Steve Zissou hat. There’s a mid-century modern feel to the furniture in Pom Pom.” 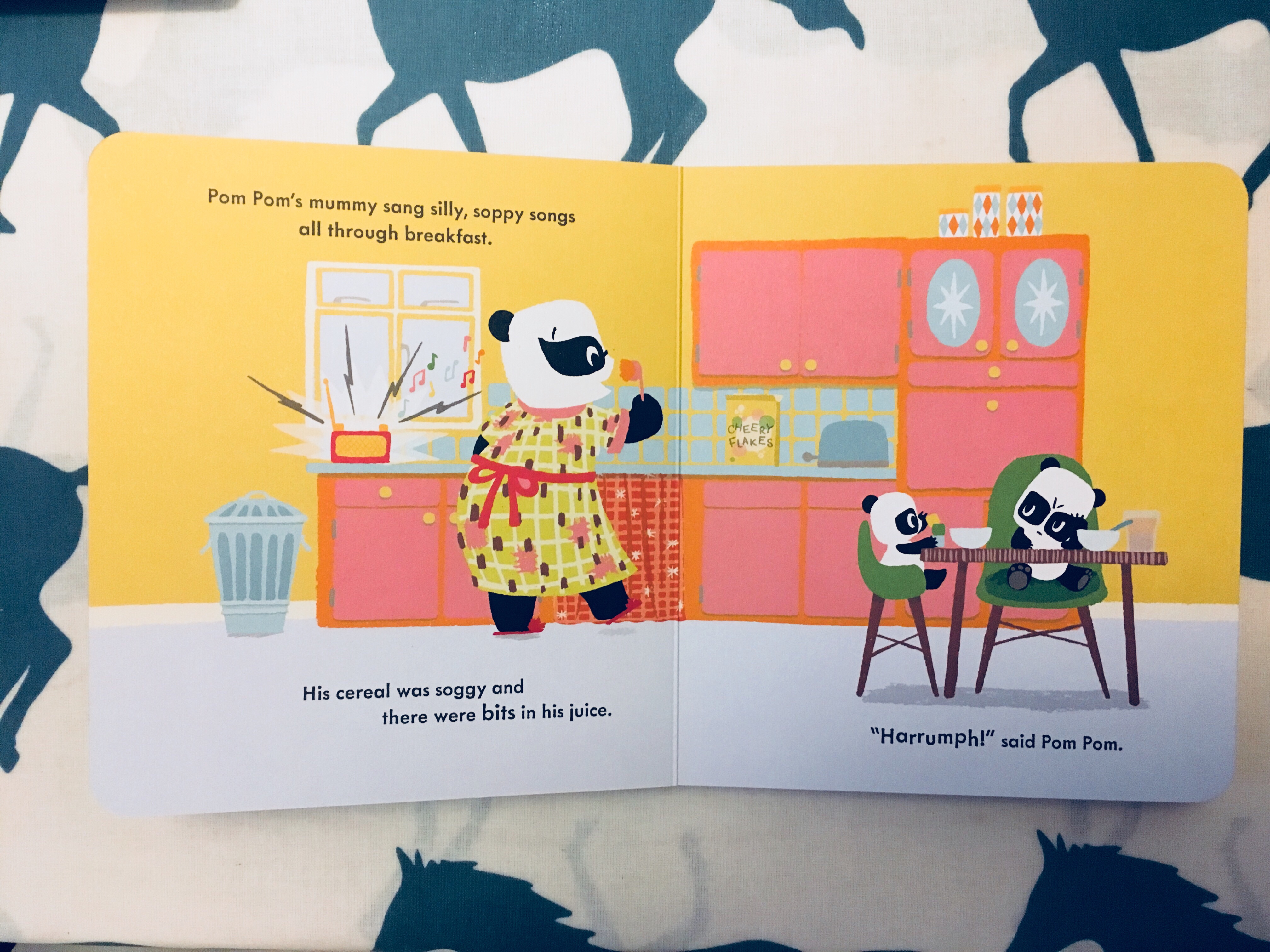 “I wish! I love his mum’s kitchen. Some pieces of furniture I wish were mine. With those period touches I want to make the book timeless, to not set the characters in a specific era or class.”

You are not afraid of colour in your books, are you?

“I love colour. My art director calls them non-colour colours! They are slightly off-colour. Pom Pom is the brightest one.”

How do you create the covers? They are very distinct.

“I’m really lucky because I get to put something forward and it’s usually an image and word, very simple. Then they ask for a little more. It’s usually the last part of the process – and the title is the very last. How do you sum up your story?!

“I think I could write it easier for someone else. When you are so close to something, immersed for six months, it’s quite a journey. I really appreciate the genius around me at Puffin to get to that last point. The cover is so important. I want kids to reach in and grab it.”

Your books are all sole works. Would you like to illustrate for someone else?

“Definitely. Or even write and get them to illustrate. I’d write all about hands and horses and unicorns – the things I can’t draw! A great premise for a book.

“A lot of what I do is quite solitary and the support I have errs on the side of positive. It would be so exciting to see how someone else sees my characters and stories.”

There aren’t that many picture books with horses in, now I think of it!

“They don’t make sense. They have this great big body and tiny head, the angles are tricky and you can’t humanise them like you can with bears.”

Almost Anything is ready to come out in March. What can you tell us about the next book?

“I’m rhyming! It’s most like Pass It On but this one is total rhyme. Which helps you make decisions.

“It’s a difficult discipline. It’s not without challenges but it is great fun to do. We are just visualising it now. It will be out in 2019.”

Where Bear? by Sophy Henn is now available as a board book. £6.99, Puffin. Her new book, Almost Anything, is out on 1 March 2018. Keep up to date with Sophy’s work at sophyhenn.com

7 thoughts on “We meet… Sophy Henn”