It’s been a bumper year for children’s books. Sales are riding high and there have been some spectacular new releases from household names and rising stars.

It’s been a bumper year for our family too.

At the start of 2017, Baby Bookworm was a mere five months old.

Now he’s a walking, talking 16 month old with preferences and a quite clear passion for a good read.

He adores looking at books, whether with one of us or on his own, and it is pretty much the only time he sits still.

He likes variety too, thankfully for us, although there are some clear favourites on the bookshelf that he returns to again and again.

While we have our own personal preferences on the year’s dazzling array of releases, we decided that these nine books should all be ones Baby Bookworm has shown most interest in.

Who can blame him? It’s bright and bold, with sweet animal illustrations that make him smile. Jane has a lovely warm style of drawing with a very distinct look, too.

Read our full review of this book

Grumpy Frog is not grumpy, okay? He just likes green and hopping and winning – and hates anything or anyone different.

But this narrow world view means our frog alienates his friends and ends up alone in a dark place… until he does some soul-searching and a bit of grovelling.

This irreverent and witty book by Ed Vere is huge fun while conveying an underlying message about tolerance, compromise and saying sorry. The chatty narrator-character dialogue also makes it ideal for reading aloud at bedtime.

Read our full review of this book 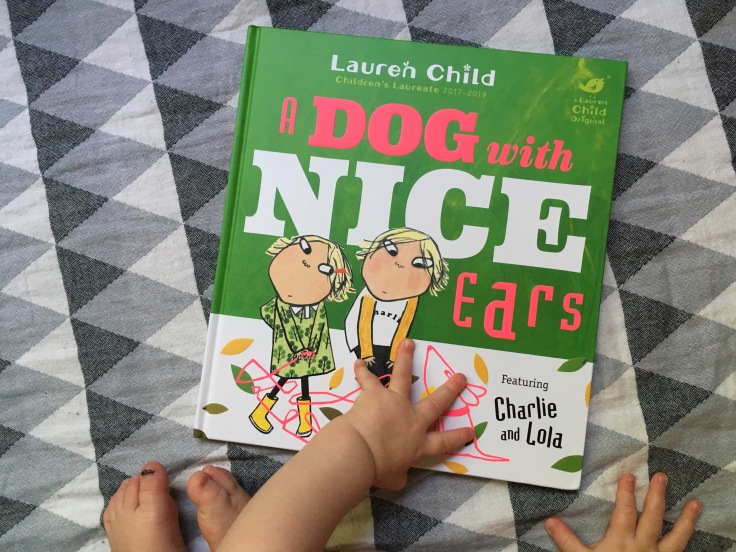 The super sibling double act returned this year with an amusing saga about choosing a pet dog, featuring more of the sharply observed dialogue that first made them a hit 17 years ago and started Lauren on the road to being Children’s Laureate.

The mixed media artwork and distinct typography is just gorgeous to look at and we especially love the neon pink imaginary dog who appears throughout the story (and apparently the ones on the endpapers were drawn by her daughter).

Baby Bookworm is now obsessed with “Lola” and her “boots” and we can’t wait to read some more stories about this delightful duo.

Hugo has a hankering for something to eat – but it’s not what you’d imagine. He’s sick to his pointy fangs of red meat and craves a fresh and healthy meal that will fill him with energy for his nighttime escapades.

This rhyming tale about a vampire-turned-veggie is wonderfully light-hearted and humorous, with boldly coloured illustrations and a lead protagonist that puts us in mind of Count von Count from Sesame Street. A perfect story for encouraging greens-avoiding children to give peas a chance, too. 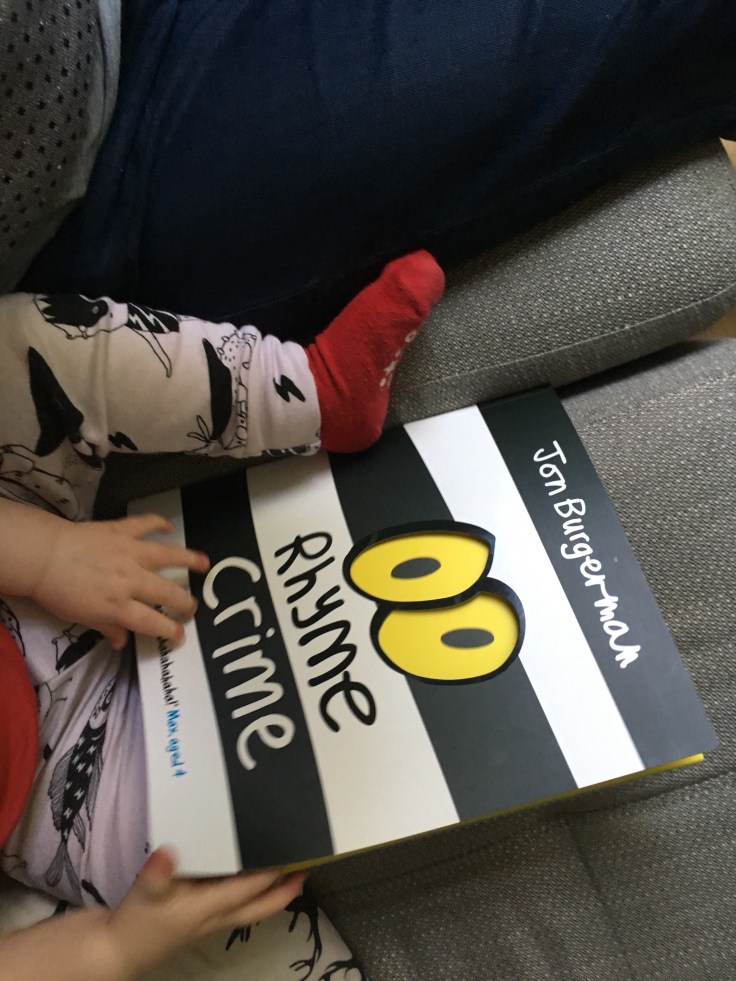 Silliness reigns supreme in this surreal story about a thief who swaps his loot for a rhyming replacement, with hilarious results.

The cartoonish illustrations in a bright colour palette have an Eighties feel and may remind parents of the TV show Rhubard and Custard. 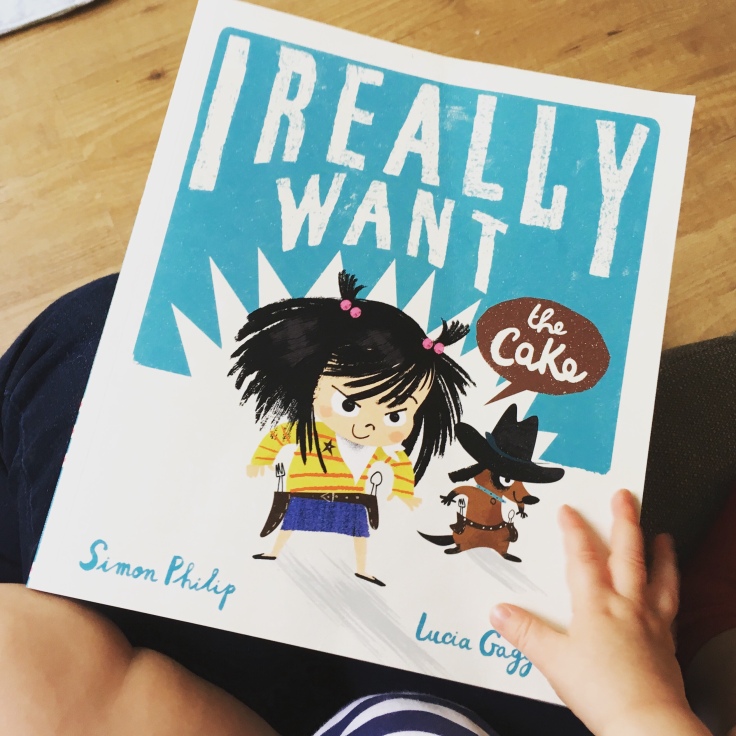 Good things come to those who wait. But you try telling that to a toddler – especially when food is involved. This hilarious rhyming story follows one girl’s internal battle between her craving for cake and knowing it is forbidden.

The illustrations have an energetic Manga vibe that perfectly convey the wild mood swings and deeply felt urges of a young child. Inevitably, she gives in to her greed and what ensues is a messy attempt to right the wrong that will raise a chuckle from children and a knowing smile from parents.

Baby Bookworm probably says the word “cake” a few times an hour as a result of repeated readings of this story.

Read our review of this book

This classic character turns kick-ass in this cool new version by the award-winning author-illustrator.

No waiting around to be rescued by Prince Charming – this 21st Century flaxen-haired maiden takes on the witch with her own cunning and rides off into the sunset with a superhero cape and a natty new haircut to boot.

We adore the eye-catching three colour palette of black, white and yellow, too.

This story of a boy called Sid and his not-so-imaginary friend, who he tries to blame for his bad behaviour at home, is the fifth can’t-be-faulted release by author-illustrator Rob.

We adore how Kevin doesn’t conform to gender stereotypes with his pink and vanilla fur, and the rhyming text is as catchy (and easy to read over and over!) as ever.

The book feels like an evolution in Rob’s style, with a more grown-up narrative and potential to become a children’s film. Watch this space! 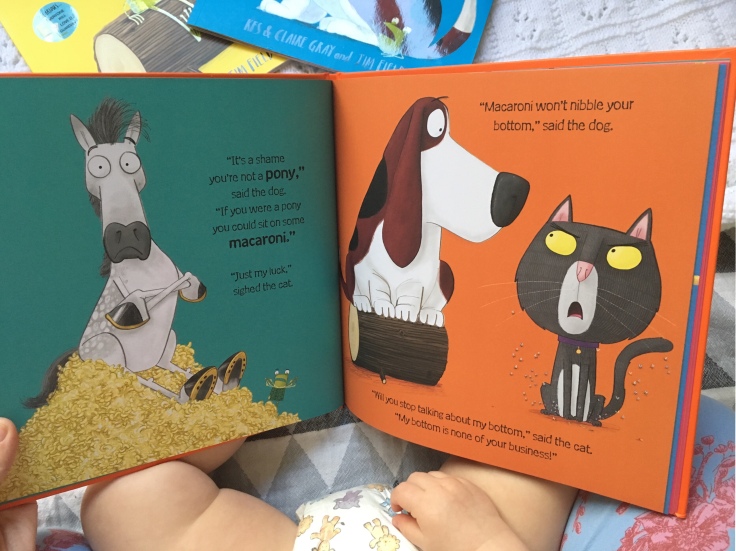 The third tongue-twisting instalment in this bestselling saga of super silly seating scenarios is as irresistible as its predecessors.

We thought nothing could top the wit and wordplay of cheetahs sitting on fajitas but this time we have a pony sitting on macaroni.

As ever, the illustrations are a riot and there’s lots of opportunity for funny voices for the trio of characters, should you fancy it.

We can’t wait to see what comedy capers the next edition, Oi Goat! – which has been penned specially for World Book Day – has in store.