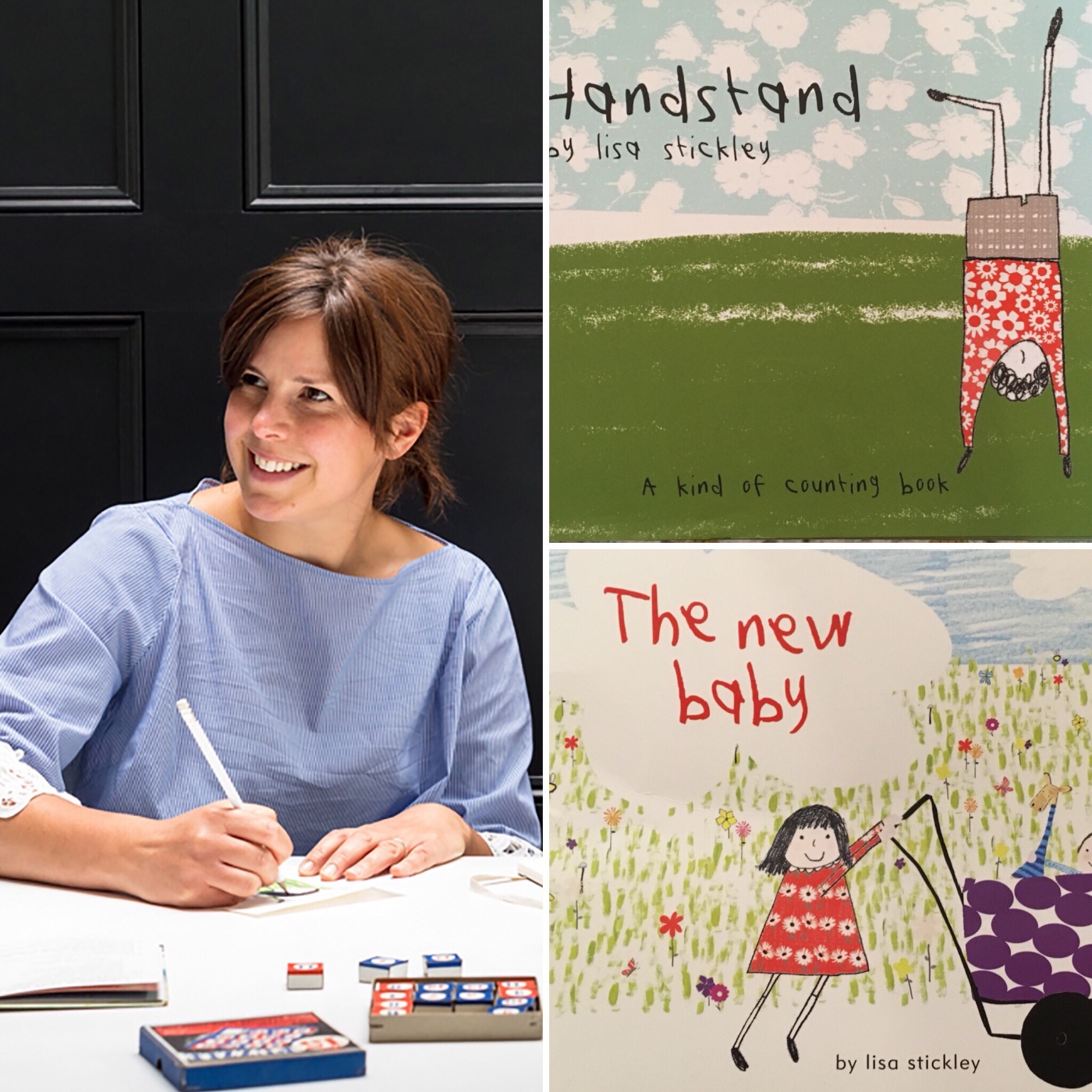 The first time I met Lisa Stickley, we were both finding our feet.

She had just published her debut children’s book, Handstand, and was giving a talk at my Women’s Institute. I was attending my first meeting since giving birth to Baby Bookworm two months earlier and he’d been allowed to come along with me as a special guest.

I took Lisa’s card that night before I dashed off with my grizzling newborn, promising I’d be in touch at some point. The blog hadn’t even crossed my mind at that stage.

Fast forward 18 months and things are very different. My newborn is now a little boy and Lisa’s third book starring a quirky little girl called Edith (inspired by the eldest of her two daughters) has just been published.

The New Baby tells the story of Albert’s first year in the world, as observed by his big sister. It’s a charming, true-to-life tale of their blossoming relationship and packed with Lisa’s signature joyful comedy.

Last year’s My New Room was an equally fresh take on a tried-and-tested picture book topic, with Edith’s cast of toys giving little insights into the big move. It felt like a cross between Toy Story and the Creature Comforts adverts from back in the day, mixed up with Lisa’s collage and doodle artwork.

Prior to publishing, the mum-of-two was a highly successful textile and product designer whose work was sold in Liberty’s and internationally. But her businesses went, in her words, “pear-shaped”, and the books came about by observing her young daughter and her world.

We caught up with Lisa to find out more…

Your style is very distinctive and rather magpie-like. Was that intentional?

“People say this all the time. I have three publishers now and in my head, they are different aesthetics. But I think you find things that you love and bring them together in a look that is unique to you.

“My lines are quite naive and I like that look. I’ve also built up that particular handwriting I use in the books over time. I used to stitch lines like lined paper into fabric and I’m obsessed with children’s handwriting.

“Cy Twombly is one of my all time favourite artists. I find his work so poetic and the marks so beautiful. I can imagine someone who is not an art appreciator saying ‘I could do that, it’s a load of scribbles’. But it gets me inside. So I’ve always really loved marks that are from the heart rather than contrived.” 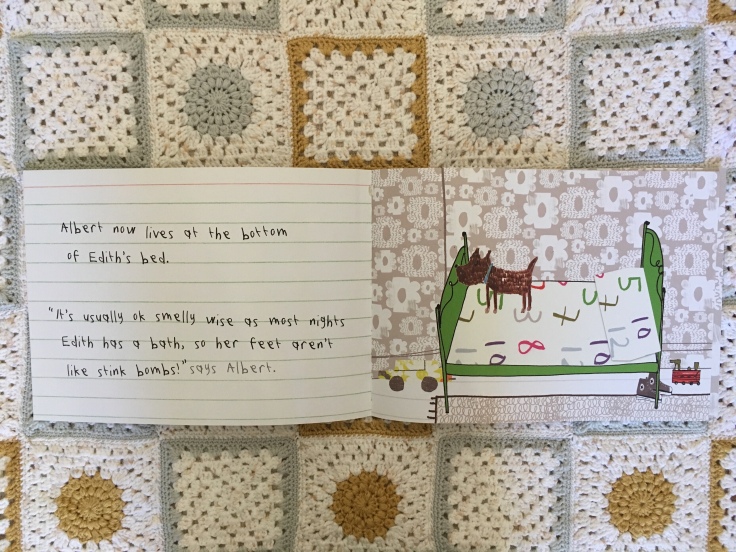 Where do you start the process of creating a book?

“The New Baby was actually an idea from Pavilion, the first two had been my ideas. At the time I was pregnant and reading new baby books with Edie, but they were as dull as ditch water.

“However, for a time I got quite stumped. I’d read so many, I didn’t want to reference them. I started writing down what Edie and Ada did during the day. I like a theme to run through the story so I introduced lots of noises. I hoped that if I was a small child, confused by what was going on with this new sibling, the laughter would help.”

There’s lots of chat about bodily functions – Edith’s smelly feet and the baby’s wind! It’s brilliant because children are obsessed with poo and wee, aren’t they?

“There are! I like to give it some comedy and kids love to make noises, engage and laugh at a book.

“It allows the child to step back and observe while dealing with their feelings. If they can laugh at the baby blowing raspberries and farting and stinky poos, it lightens the load.”

Were you writing The New Baby as your daughters were developing their relationship?

“It was a combination. It’s amazing what you can do while feeding on the sofa with an iPhone! It was half what they were doing and half me remembering Edie’s milestones. The second child is so different to the first because they have a goal to catch up with the older sibling.”

All three of your Edith books have a gentle learning element woven into the words and illustrations, like the months and numbers, but they are not in your face.

“It’s quite conscious. It’s like anything I’ve designed, from a zip coin purse to a duvet cover – I feel that if people spend their money on something, it has to function well. So the more I can give in a book, the better value for money.” 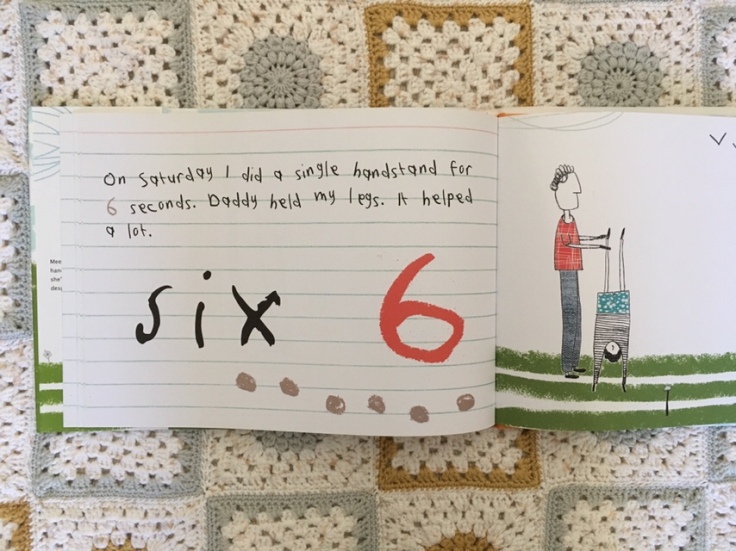 Your daughters are clearly a big influence. Are you constantly writing things down?

“Always! We very deeply dislike our kitchen. We had plans to do it up but then kids came along. The best I could do was paint them with blackboard paint and I scribble everything on them.  I plagiarise my children basically.

“I’ve lost my memory since having them, so my cupboards are covered in thoughts, from a heron doing the high jump to a book about body parts.”

Will you be cooking dinner and stop to chalk something down?

“Yes! The girls will be saying ‘Mummy, Mummy!’ and I’ll be saying ‘Just repeat that…’ I child swap with a friend who also works from home, and me and the kids had this amazing conversation in the car the other day.

“As soon as we got home I wrote it down and thought ‘I must photograph it’. The next thing I knew, Edie was shouting ‘Mummy, I’m cleaning!’ and it was gone. I could have got four books out of that!”

Do you test your work out on them?

“Totally. Ada is still a bit little, but Edie is brilliant. One book I am writing at the moment she absolutely loves and wants again and again. I’ve done lots of workshops with kids now and they can be so funny. Sometimes they sit with a blank look and it makes it difficult to read.” 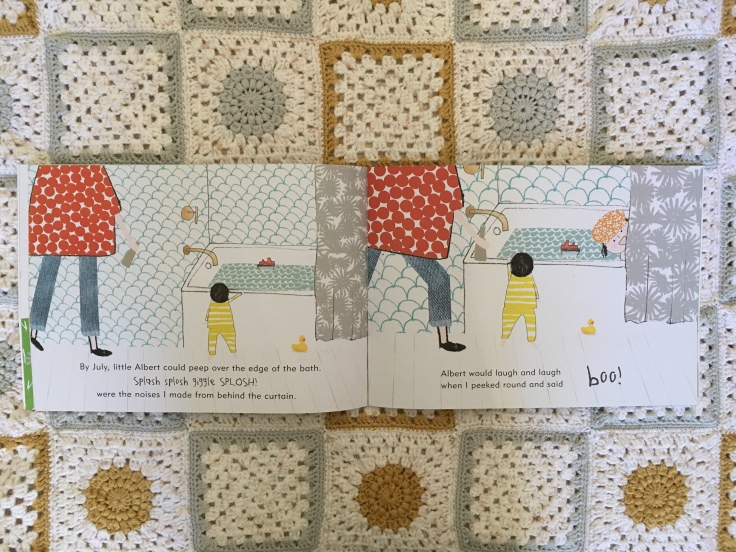 “I hope so, I have lots of ideas in the pipeline. All day-to-day stuff, like the first day at school.

“The thing I love about children is they observe the tiniest stuff. We grown-ups are so busy nowadays, with work and social media. Last week there was a nice day and we sat in the garden with Edie’s friend and we found a slug on a leaf. We spent the next hour making a teepee for it. Then it blew away – it had gone on its holidays! Edie named the slug Ada.”

“With The New Baby, the publisher wanted a boy for balance so Albert was what we would have called her. She appears as narrator in my first Tate book instead.”

I read that you like drawing horses. Fellow author-illustrator Sophy Henn told me that the one thing she can’t draw is a horse. Is there anything you struggle with?

“Before doing my books, I hadn’t drawn people for years. I was scared of it. So I sat down and had a proper look at artists and designers I loved, and tried to put myself in their shoes to get started. It freed me up and now I love it!

“I love that you can draw a head and some hair and you can put the facial bits on and the tiniest of movements make such a difference to the expression. I’ve sat down and drawn 40 of the same girl – same hair, eyes, mouth – and every single one looks different. It’s amazing.”

You were longlisted for the CILIP Greenaway Medal 2018 for My New Room. How did that feel?

“I couldn’t believe it. It was such a journey to get to here and I’m loving it. I feel very jammy.”

Does that recognition spur you on?

“I have learned so much, like embracing my fears of drawing people. It’s a very different world to commercial fashion and I’m trying hard to make books that will be useful, liked and engaged with.

“Finding my feet has been a real journey. That nomination made me feel able to say I’m an author-illustrator and designer. I feel like I have crossed a line.”

The New Baby by Lisa Stickley is out now. £6.99 (paperback), Pavilion. Buy from Amazon

You can find out what Lisa is up to at lisastickleystudio.com and by following her on Instagram @lisastickley_studio

6 thoughts on “We meet… Lisa Stickley”