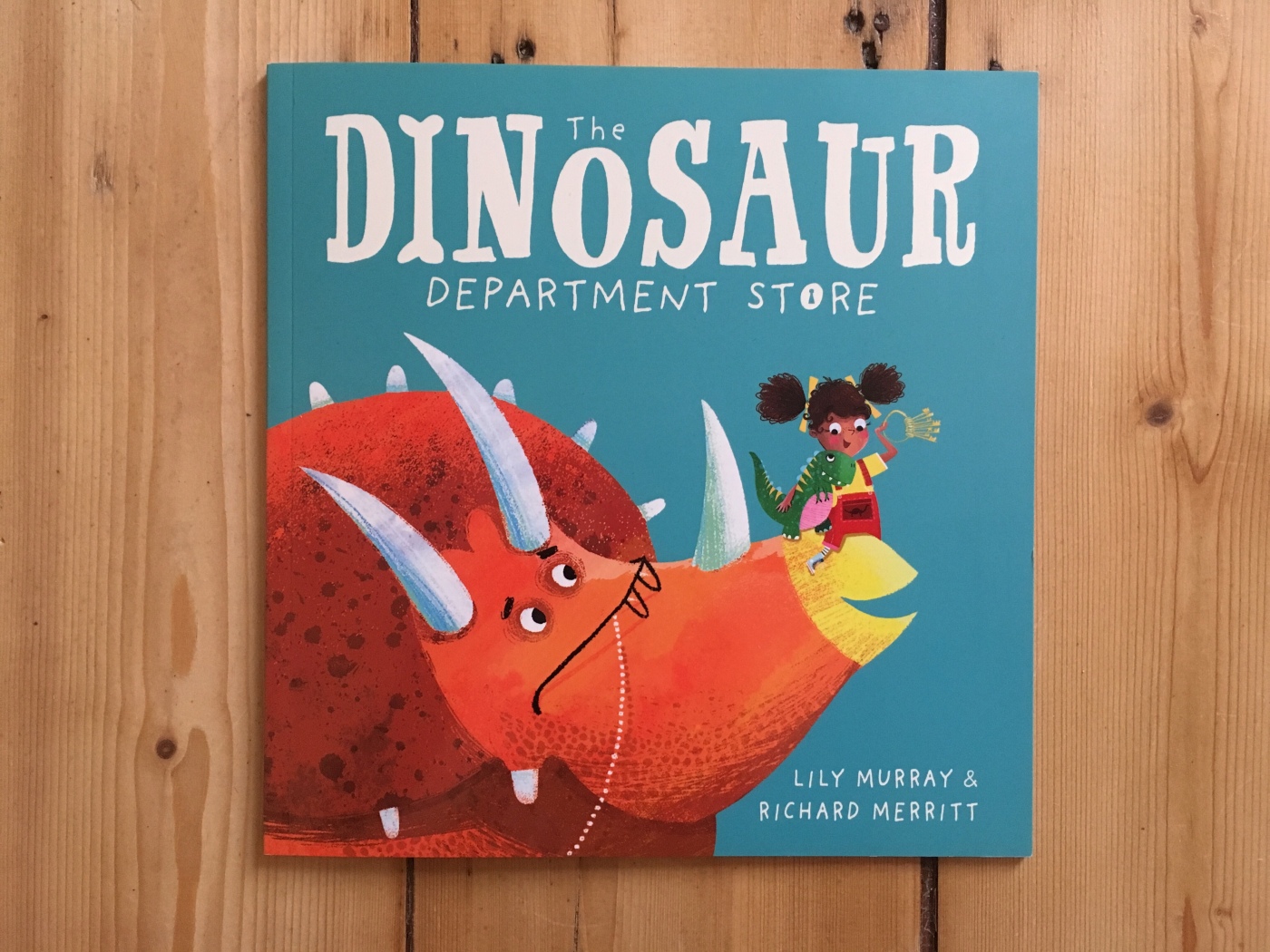 Nothing reminds you that everyday sexism is alive and well more than seeing shops filled with dinosaur toys and clothes aimed at boys – and very few for girls. Those that do exist are usually pink.

But my childhood recollections are that both genders find these prehistoric beasts fascinating and, as another mum pointed out recently during a moan about this dino discrimination, half of all dinosaurs were female, weren’t they? 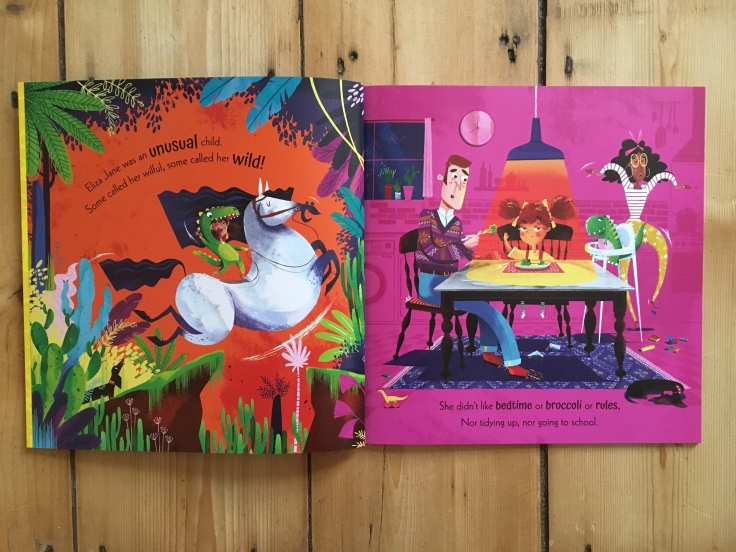 So that’s why I was delighted to get my hands on a copy of The Dinosaur Department Store, a hilarious and energetic new book by author Lily Murray (of Hello, Hot Dog) and illustrator Richard Merritt (whose work you may have seen in the Pat-a-Cake board books).

The title, which is published by Buster Books, sees dino-loving Eliza Jane demand a prehistoric pet of her own for her fourth birthday – which her reluctant parents bravely agree to.

Thus follows a bonkers trip to the Dinosaur Department Store owned by flamboyant Mr Magisaurus, who gives them a tour of his collection of hadrosaurs, sauropods and ankylosaurs. 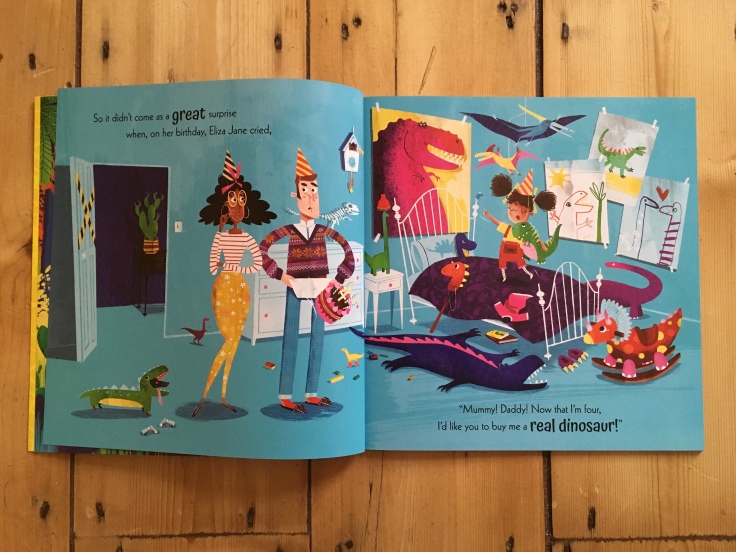 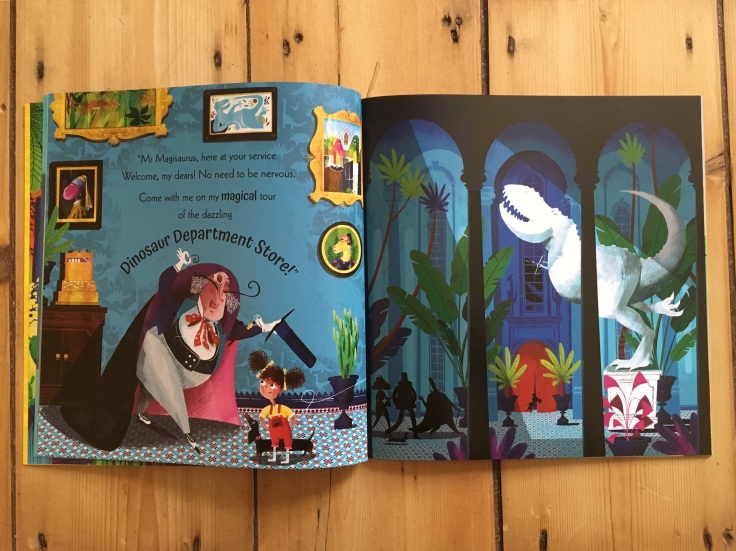 There’s a brilliant punchline at the end, when the girl declines to take one home… instead secretly setting the stock free while no one was looking, because she decides they would be happier in the wild.

Not only is it huge fun, but it contains many important messages for children – and a hearty helping of dinosaurs of all shapes, sizes, colours and genders.

To celebrate the book’s publication, we’ve asked Lily and Richard a few questions about the book. Here’s what they had to say… 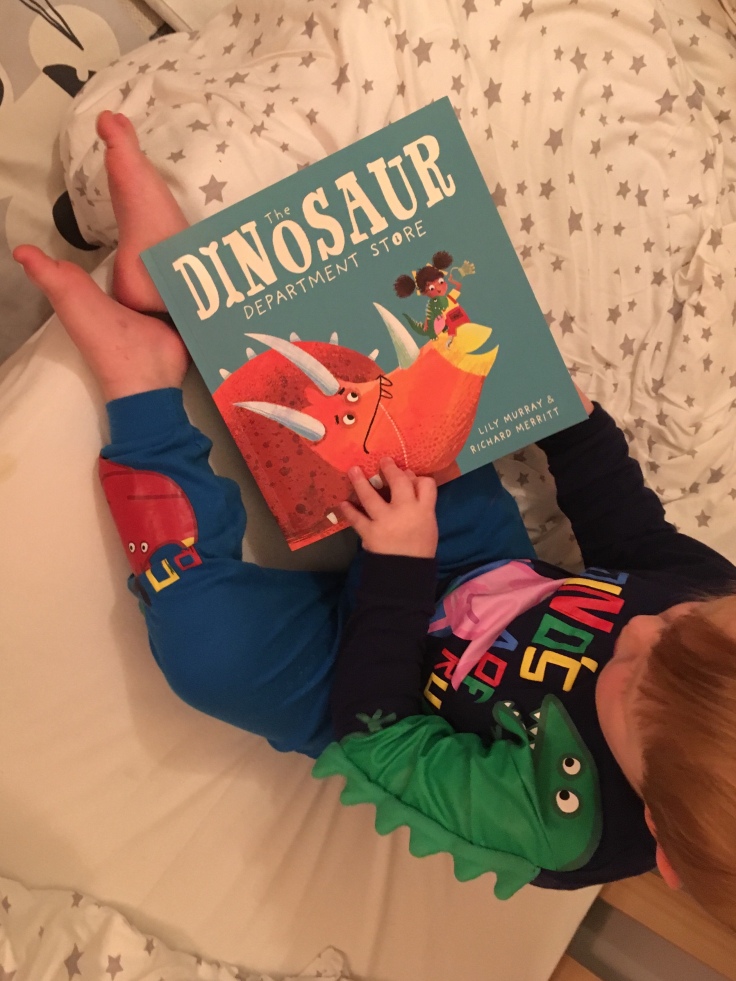 Where did the idea for the book come from?

I was inspired by a wonderful real life Eliza Jane who didn’t like rules or going to school and who always knows her own mind. Then the words ‘Dinosaur Department Store’ popped into my head and the story began when I put the two together.

This isn’t your first book about dinosaurs – why do you enjoy writing about them?

I think dinosaurs have a fantastic place in children’s imaginations. They are terrifying and huge, as well as fantastically varied. Best of all, for all their fearsomeness, they’re safely locked away in the past.

The main character is female and dinosaur obsessed. Do you find it frustrating that lots of dinosaur toys and clothes for kids are still mostly aimed at boys?

Eliza Jane is also a strong character with a wild and energetic nature. Do you feel that there are still too many stereotypes about girls in books?

I think there are lots of wonderful books out there now about wild, energetic girls which are breaking down the old stereotypes. But we need to keep them coming! 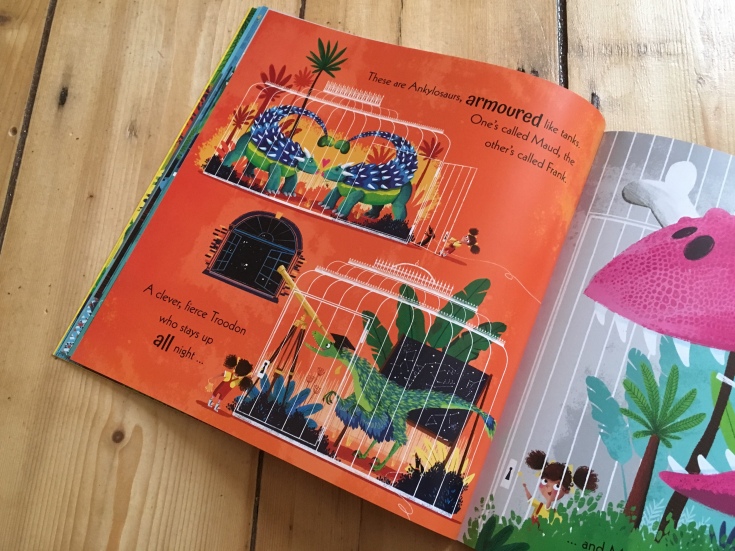 Finally, which dinosaur is your favourite?

Probably Troodon, for its cunning and intelligence.

How did the collaboration between you and Lily work?

We were paired by the publisher, and thankfully Lily liked my style so it all slotted in nicely. I was familiar with Lily’s other books, so I was thrilled to be asked to do this one and I loved the text with the bold central character of Eliza Jane – she’s super cool and mischievous!

This is a very vibrant, flamboyant book in terms of artwork. What inspired you?

I think it’s in my blood to be a bit flamboyant! But in all seriousness, all the remit from the publisher was that the art should be big, bold and colourful, so I got free rein to go a little OTT, which was great fun.

I’m inspired by most things really, day to day, everything you encounter can provide rich pickings for illustration. I like to add things in that make me laugh, like references to famous artists or popular culture. Fashions inform the style of characters (who doesn’t want to see a dinosaur in a hat?) and architecture and design informs the environment in which they sit, so it all goes towards creating my pictures. People that I’ve met often find themselves turned into characters too, so look out if you ever cross my path, you might be immortalised next!

Like Lily, this isn’t your first children’s book about dinosaurs. Why do you think children find them so fascinating?

Weirdly, I was working on another dinosaur book shortly after finishing The Dinosaur Department Store. You wait an age for one to come along and two turn up at the same time – typical! They are eternally popular I think because we can’t quite believe such incredible beasts existed. I’m still fascinated by them, so imagine being a child and thinking about a giant creature the size of a house ready to gobble you up – it’s the stuff of fantasy, and yet they were real! Kids love scary stuff too, so what’s scarier than a T-Rex with razor sharp teeth?

The illustrations of the dinosaurs are very colourful but also feel very accurate. Did you have to study the different types closely?

The publisher was keen that they were to look reasonably accurate, or at least how scientists believe them to look, in terms on size and proportions and so on. I think it grounds them in reality and makes them immediately recognisable to us, which of course, all helps with learning about them.

I mean, I’m sure they didn’t have comedy eyebrows or wear high heel shoes and hats but at least they are roughly the right size and shape! I researched a lot for this with many a reference, and now I’m obviously now an expert in dino studies. 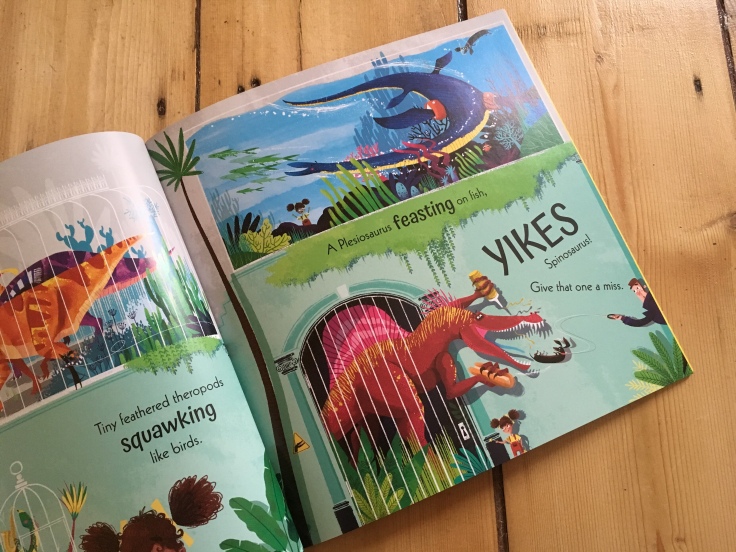 Finally, which dinosaur is your favourite?

Tough question! I think I identify with Spinosaurus, because I too enjoy a good hotdog.

The Dinosaur Department Store by Lily Murray and Richard Merritt is out now. £6.99 (paperback), Buster Books

Bookish play: How to draw Dora the Dinosaur with illustrator Richard Watson