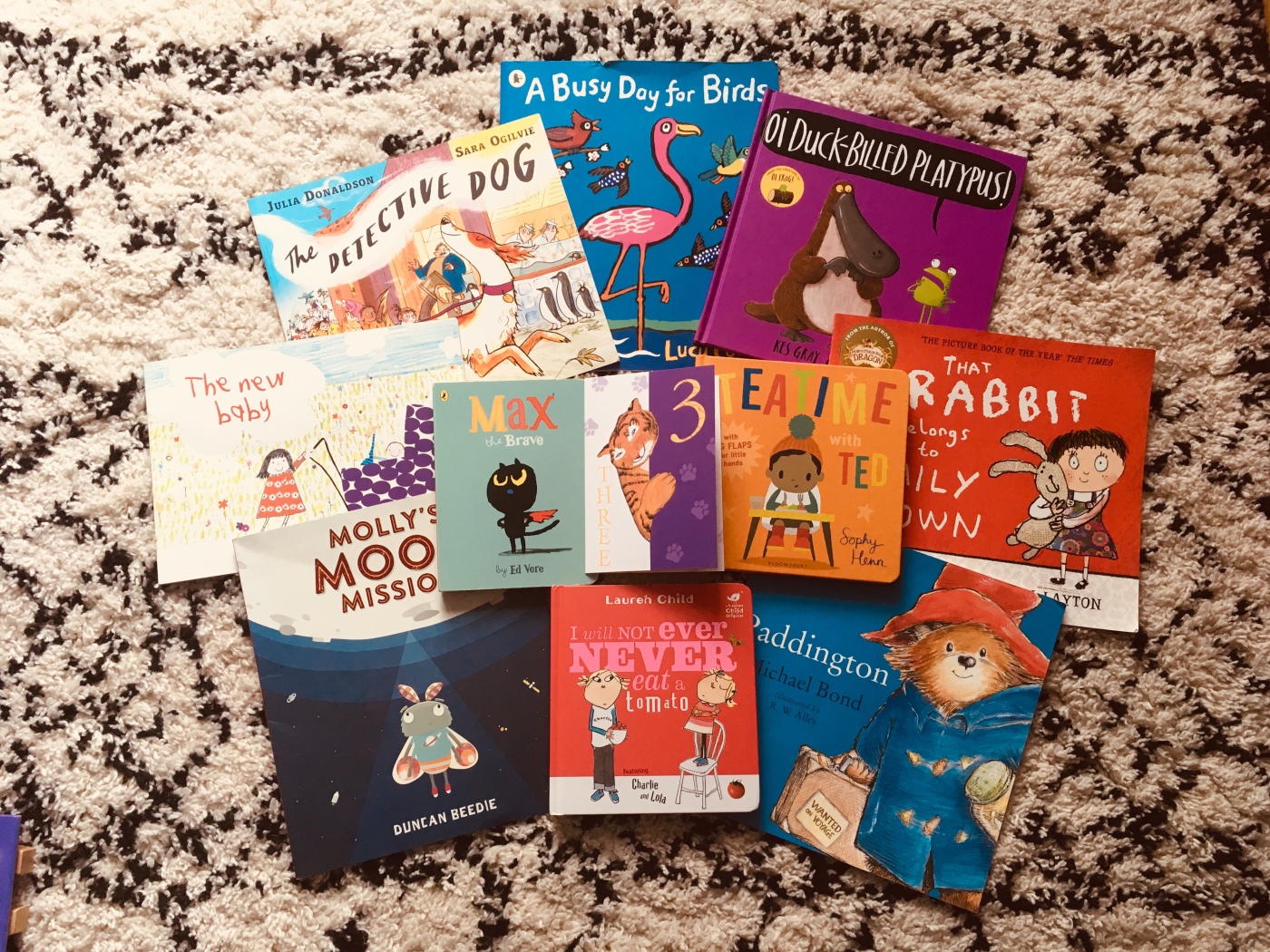 “For King Baby is no longer a baby, he shall become [dramatic pause] a BIG BOY!”

Yes, Baby Bookworm has turned three and this pivotal line from our old favourite King Baby has been ringing in my ears of late.

Over the last 12 months, he’s turned into a proper little boy,  who has plenty to say, knows what he likes and can even ‘read’ his favourite books to us as well as point out a few letters (thanks to the efforts of his nursery staff).

I’m also wondering how long I can get away with using his nickname, especially as we have another baby due any day now.

As has become tradition, we celebrated his birthday with a Victoria sponge and by selecting his top ten reads over the past 12 months, a mix of new and older books. Plenty of the choices from previous birthdays are still in very much in favour, like The Tiger Who Came To Tea, but these are ones he has really enjoyed this past year.

Goodbye Terrible Twos, hello Threenager! I wonder what tales the next year will bring? 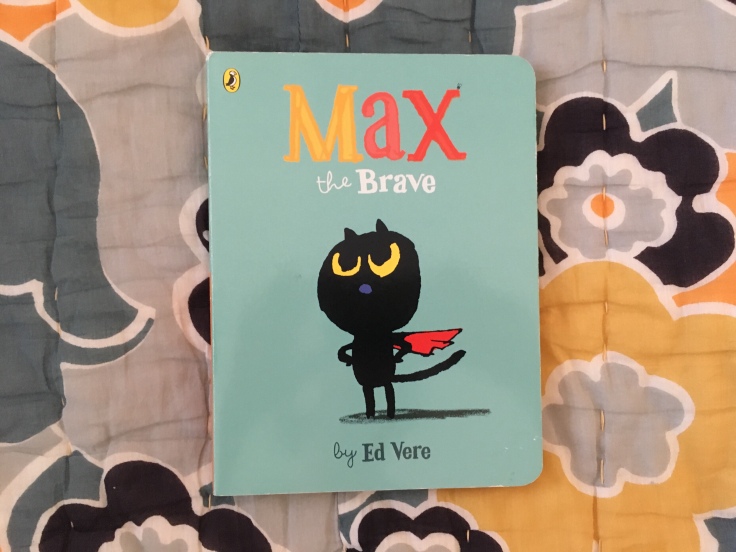 Ed’s more recent How To Be A Lion was a close contender for the top ten, but this older title about curious kitten Max was a consistent favourite over the last 12 months.

We love the simple artwork, with Max a black inky spot against bold coloured backdrops, and the amusing confusion of him being told that the monster is in fact the mouse he is hunting. It is funny, sweet and like many of Ed’s stories, features a scene of one character eating another, to much mirth from the reader. 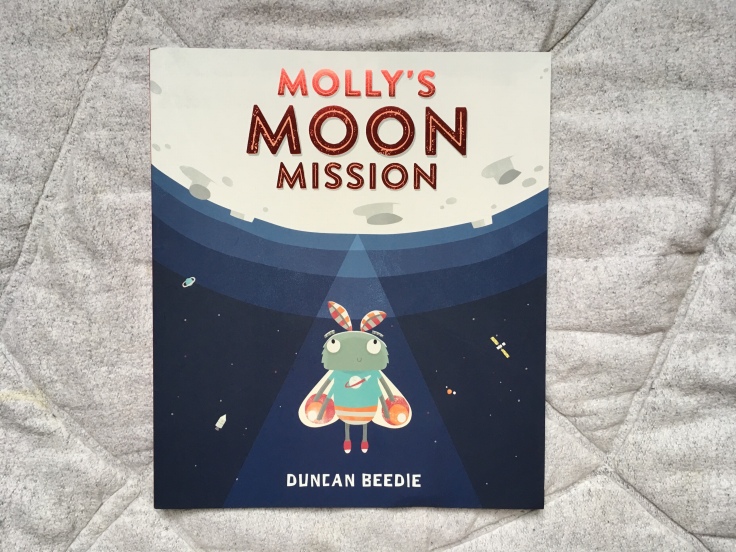 Duncan Beedie’s fourth book tells the tale of a tiny moth who has a big dream – to fly to the moon. The odds are stacked against her and others doubt she can make it but even after a few wrong turns, Molly is not deterred from her far off destination.

The story was an instant hit in our house, thanks to its engaging illustrations, humour and space theme. Baby Bookworm loves to do the ‘5, 4, 3, 2, 1… blast off’ countdown and feels a real empathy with the main character.

She’s also a really positive role model and I’m always heartened to see a female lead, particularly in the traditionally ‘male’ part of an astronaut. 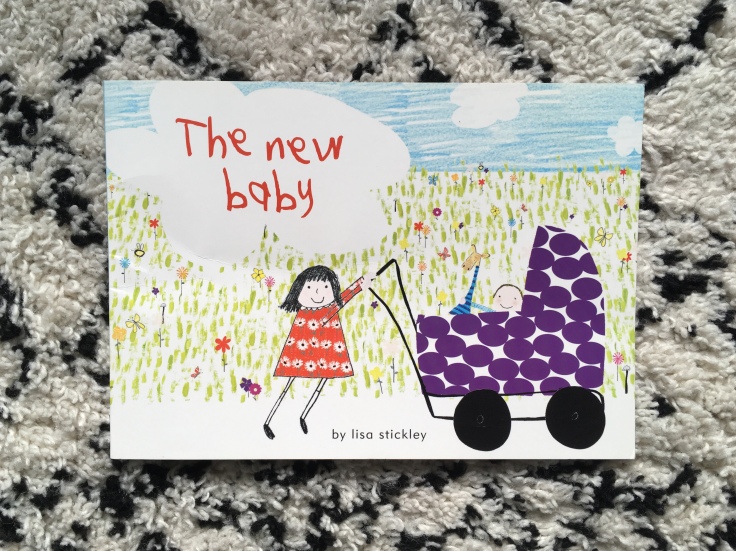 Our impending new arrival means this book has been on heavy rotation Chez Bookworm of late. But luckily it’s a fantastically fresh take on the tried-and-tested topic of new siblings, following the story of Albert’s first year in the world, as observed by big sister Edith.

Author-illustrator Lisa Stickley cleverly charts the new baby’s development and the growth of their relationship month-by-month, with plenty of comedic noises, smelly poos and sweet moments. Charming, true-to-life and with bags of reassurance for older siblings. I give a copy to everyone who has a second baby!

Lisa Stickley reveals how her own daughters inspired The New Baby 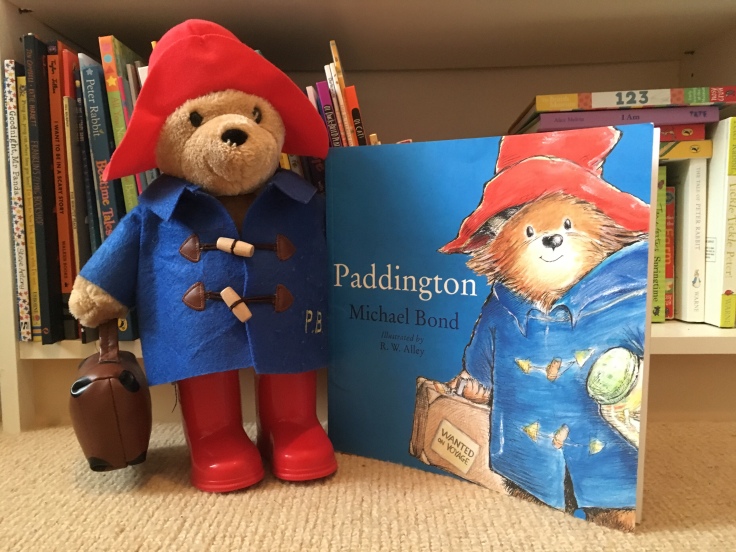 Baby Bookworm was borderline obsessed with the Paddington films last year, which led nicely to us getting into the picture book versions of the iconic tales.

While the late Michael Bond’s beloved character first appeared in 1958, this bumbling bear with a heart of gold and his message of tolerance still feels relevant today.

60 facts about Paddington on his 60th birthday 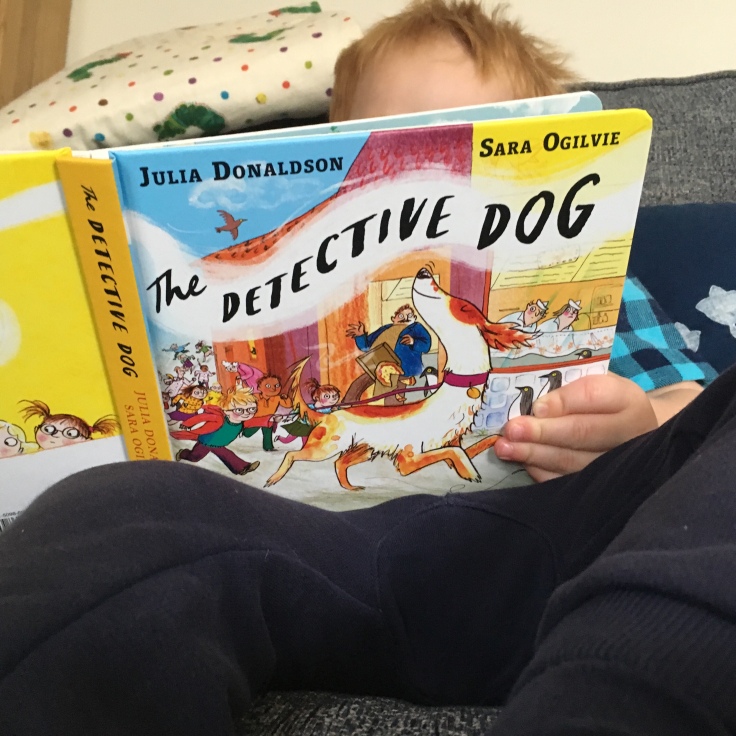 Nell’s two passions in life are finding six-year-old Peter’s mislaid belongings and listening to children read books. So when the school’s books are stolen, her keen sense of smell and innate curiosity mean there is only one detective for the job.

As ever with Julia Donaldson, the rhyming text of this tale is utterly flawless while the concept is completely charming. There’s also a retro feel and appealing energy to Sara Ogilive’s artwork, with big bonus points for the fantastic female lead character. This may be controversial but it is probably our favourite Julia Donaldson of all time.

Julia Donaldson reveals which of her own books is her favourite 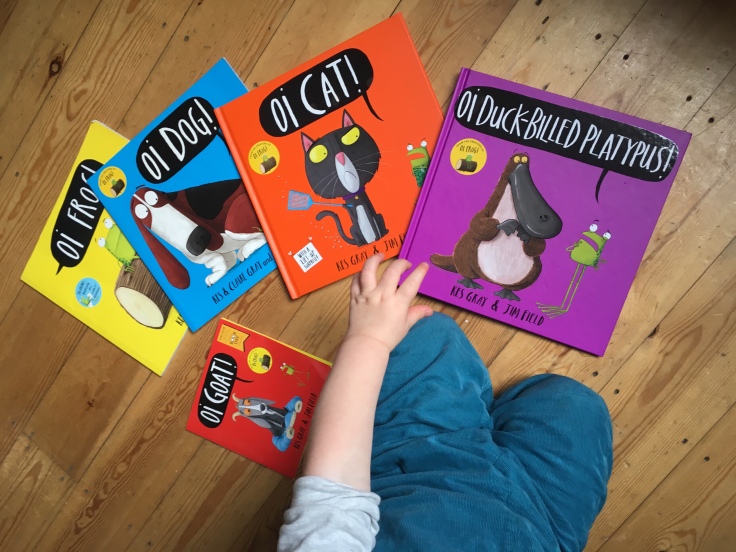 This is a bit of a cheat but how do you choose between the titles in Kes Gray and Jim Field’s phenomenal Oi series?! The tales of an army of animals taking up silly-seating-scenarios has become a publishing sensation over the last few years, with more than a million copies sold and most recent title Oi Duck-Billed Platypus! keeping the joke going – and as funny as ever.

Baby Bookworm will happily listen to any of these and tolerate my poor attempts at doing voices for the frog, cat and dog. We can’t wait for the next installment – Oi Puppies – coming soon!

Why we love the Oi! books 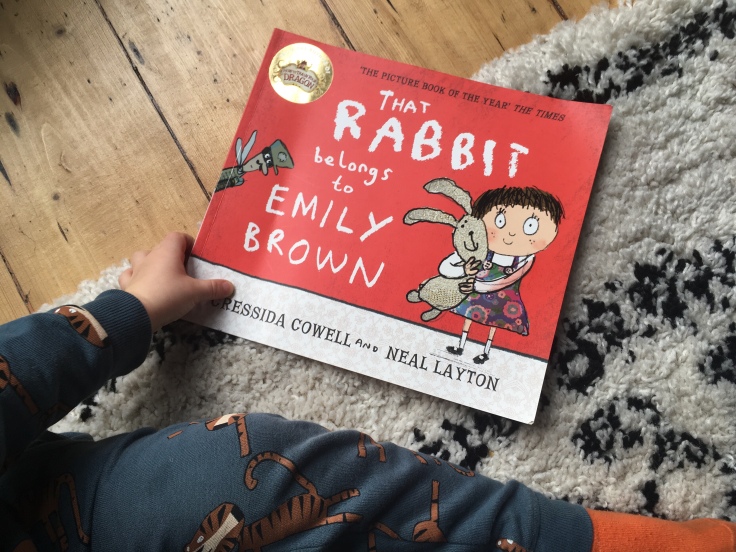 When we asked authors, illustrators and parents for their favourite female lead characters last year, Emily Brown was a consistent suggestion. And it’s not surprising – she’s thoughtful, brave and loyal, smashing stereotypes as she plays at being an astronaut or exploring the jungle with loyal sidekick Stanley.

This debut tale sees the Silly Queen try and bribe Emily to give up her best bunny friend but when the little girl refuses, Stanley is the victim of a nighttime raid and Emily has to come to his rescue. It’s touching, funny and Neal Layton’s patchwork artwork is a delight. 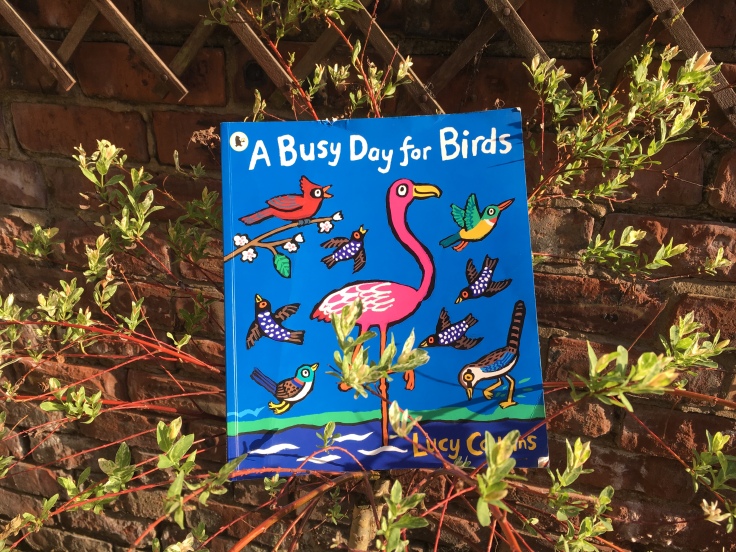 From the dawn chorus to the owl’s night time song, this colourful exploration of the daily life of birds is joyous. Lucy Cousins’s characteristically vibrant illustrations are a feast for the eyes, while the funny rhyming text implores readers to hop, hoot and peck along with the story.

It’s lots of fun and a real celebration of our feathered friends in all their swooping and swimming glory, from the polar penguin to the commonplace cockerel. The oversized pages really bring the images to life while we like looking at the endpapers to see which birds sleep in the day and which rest at night.

The best books about birds 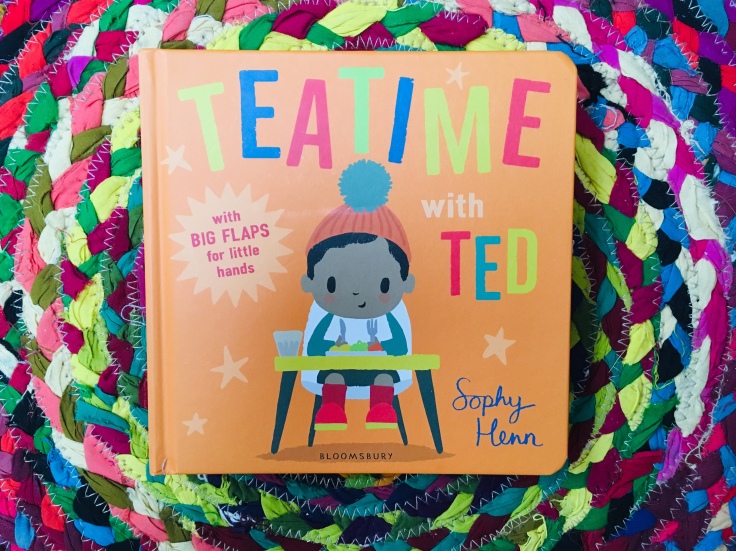 This board book from Sophy Henn’s charming Ted series was a second birthday gift for Baby Bookworm and has become a bedtime regular ever since. The story is simple and repetitive so little ones can join in, with full page flaps to lift and reveal Ted in a world of lifesize foodie treats accompanied by his toy pals.

A great one for getting fussy eaters excited about broccoli and carrots, plus a rare non-white male lead always gets the thumbs up from us. 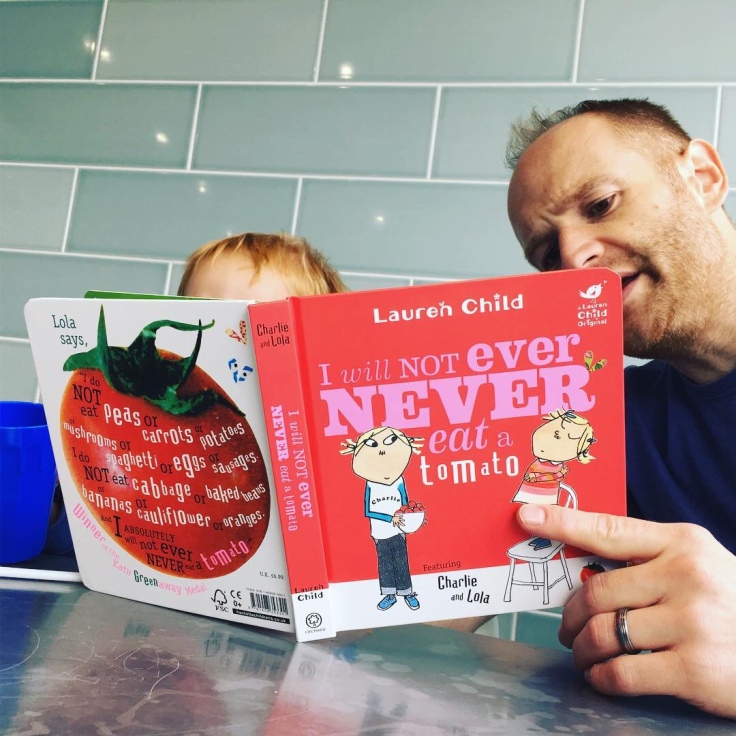 Charlie and his funny little sister Lola are practically royalty in our house, thanks to Lauren Child’s astute observations of children’s conversations and groundbreaking mixed media artwork.

All of their everyday adventures are much loved by Baby Bookworm but their debut story about Lola’s stubborn fussy eating – and Charlie’s imaginative ways to get her to try foods she apparently hates – always entertains. It might be 19 years old but this book is as fresh as ever.

Lauren Child reveals why Charlie and Lola will never grow up